The “Granddaddy” of UFO Encounters

In 1955, the Sutton family of Kelly, KY encountered what has become known as the “Granddaddy” of UFO encounters.

Imagine sitting around the family dinner table on a quiet Sunday evening. Conversations are happy, stories shared, and the dinner dishes have been dried and put away. Suddenly, there is a knock on the door. Standing there on your porch is a good friend, one you have known for years. He asks you to come outside and look at some strange lights in the sky.  This is precisely what happened to the Geraldine Sutton Stitch in 1955. What happened next became known as the “Granddaddy” of all UFO stories.

On the night of August 21, 1955, eleven members of the Sutton family gathered at the family farm. At approximately 7:30 pm, a family friend named Billy Ray Taylor stopped by to talk to Geraldine’s father. They went outside to look at the strange lights in the sky. As the two men walked along, they suddenly stopped in their tracks. Startled, they looked upon “a three-foot-tall being with a huge head, big glowing eyes, and arms that almost touched the ground.” Police reports also reported that it was green. Next, Geraldine describes what can only be understood as incredible. The little green man approached the house.

Shots were fired, and he ran off into the nearby woods. However, he later reappeared with more like him. The family farm was under attack. The green aliens went up onto the porch of the house and peered into the windows. Furthermore, the scared residents could hear their hands scraping on the tin roof above them. The family fired upon the creatures to no avail. The green men rolled or walked away. The frightening encounter lasted for three hours. Finally, the family escaped and drove to the police station in the nearby town of Hopkinsville. 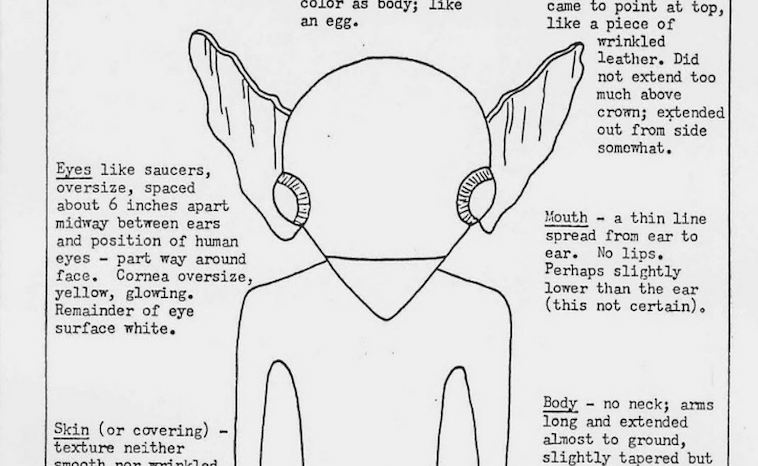 At the Police Station

Upon arriving at the police station, the family recounted their story to the single officer on duty. He called his chief at the nearby Army Base. The chief listened to the story and found it credible enough to send officers to the farm. Unfortunately, the police could not find evidence of the aliens. However, they did find lots of gunshots in the frame of the house. It may appear that the story ended here. In fact, it does not. Hours after the police left, the aliens appeared once more. Sadly, the family endured hours more of alien encounters until daybreak.

“You can’t see them except in the dark,” Sutton explained. “The police used lights all over the place.”

The family left the farm for several days, too scared that they aliens would return.

Questions as to the family’s mental status at the time were confirmed by police. The police said the family was indeed sober and shaken by the event. Furthermore, local news articles reported that other nearby farms saw the little green men as well. Mrs. Glenie Langford recanted the following.

“They were just walking around. I saw them from my parlor window. Saw them just as plain as day.”

In addition, others near the Suttons farm reported,

“We watched a flying saucer land, and several luminous figures got out.”

Three days after the event, the family returned home. Fortunately, they never reported another visit by a UFO, the little green men. However, their story has stood the test of time. No one has ever recanted their account, and the story has never been debunked.