When Israel launched its moon lander Beresheet earlier this year it carried thousands of microscopic water bears. In April, Beresheet crashed on the surface of the moon. What happened to the water bears? Read on to find out more about these creatures on the moon’s surface.

Tardigrades are microscopic water bears or moss piglets. They were first identified by a German Zoologist named Johann Goeze in 1773. He called them water bears. Tardigrades are unique because they can survive the extreme temperatures of space. Surprisingly, they can also withstand the vacuum of space. So, the question now becomes, did Tardigrades come from space? 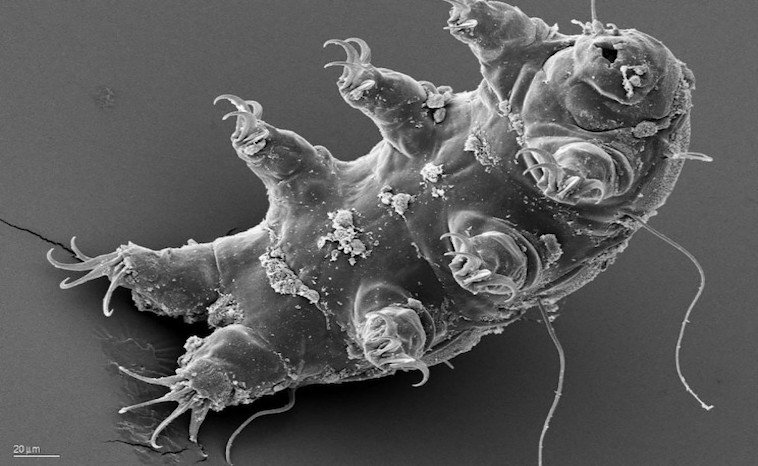 Tardigrades are little microscopic creatures about 1 mm in size. It’s a tiny caterpillar with eight legs. It has claws like a bear, hence the name water bear. Amazingly, they have a mouth, a digestive tract, muscles, and a nervous system.

Further, tardigrades have a hard shell, like an insect, and reproduce with eggs. In addition, they molt their skin. They can survive up to 300 Fahrenheit (148 Celsius) and -459 F (-272 Celsius) and 1,000 atmospheres of pressure.

These super bears can survive x-rays, and many can also survive ultraviolet radiation. One of the reasons they may be able to withstand harsh environments may rely on their ability to curl up into a small ball. A process called cryptobiosis or suspended animation (tun) and as they curl up, they form a hard shell. A molecule of moisture preserves them inside their ball.

The lifespan of a Tardigrade maybe only about six months if they alone lived in water. However, because of their ability to dry out and then rehydrate, they can live for many years. There is a possibility that they live over 100 years that way.

Where Did They Come From?

A theory known as panspermia might be able to answer where they came from. Some scientists believe that asteroids may have brought them to Earth. The problem is that the distance across space is so significant that it would take hundreds of thousands of years to go from one galaxy to another.

Mark Martin, an associate professor of biology at the University of Puget Sound in Tacoma, Washington said, “If they landed in a spot on the moon shielded from UV radiation, the microscopic creatures might stand a chance of survival.” He went on to say,

“My guess is that if we went up in the next year or so, recovered the wreckage, and found these tiny, little balls and put them in water, a few of them would come back to life,” he explained.

However, their chances of spontaneously awakening are low. Without liquid water, the tiny creatures will remain in a tun state, and while there’s evidence of ice on the moon, liquid water is nowhere to be found.

According to Kazuharu Arakawa, a tardigrade researcher with the Institute for Advanced Biosciences at Keio University in Tokyo, “Even if the lunar tardigrades did somehow encounter liquid water while still on the moon, without food, air, and moderate ambient temperature, they wouldn’t last very long once they revived.” That being said, if Tardigrades are from outer space and survived long enough to travel for thousands of years to Earth, they may be tougher than many people realize.

When astronauts reach the moon in a couple of years, we look forward to finding out if any Tardigrades survived.