Construction has begun on the largest radio telescope ever to be built. Read on to learn more about this amazing telescope.

Telescopes are designed to help us see further into space. Some help us look at objects like the moon. Others help us see infrared light. The new Square Kilometer Array or SKA Observatory will help scientists detect objects deep in space. After thirty years of development, the SQA project has received the go-ahead to start construction in Australia and South America.

In order to create a telescope of this magnitude, developers needed help from countries all over the world. It took over seven years of design by more than 500 experts from 20 countries to develop and test equipment. This equipment included the technologies needed to build and operate state-of-the-art telescopes. In addition, over 100 institutions helped design the antennas, networks, computing, software, and infrastructure needed for the telescopes to function.

“I am ecstatic. This moment has been 30 years in the making,” said SKAO Director-General Prof. Philip Diamond. “Today, humankind is taking another giant leap by committing to build the largest science facility of its kind. We will build not just one but two of the largest and most complex radio telescope networks. Their design will help us to unlock some of the most fascinating secrets of our Universe.”

“The array will detect objects so distant that their radio waves require 13 billion years to reach Earth. Therefore, it will provide a glimpse into the earliest stages of the Universe,” said French representative Chiara Ferrari

Purpose of the Telescope

Its two telescope arrays will be constructed in Australia and South Africa and be the two most advanced radio telescope networks on Earth. A later expansion is envisioned in both countries and other African partner countries. Together with other state-of-the-art research facilities, the SKAO’s telescopes will explore the unknown frontiers of science and deepen our understanding of key processes, including the formation and evolution of galaxies, fundamental physics in extreme environments, and the origins of life.

The project has two telescopes: 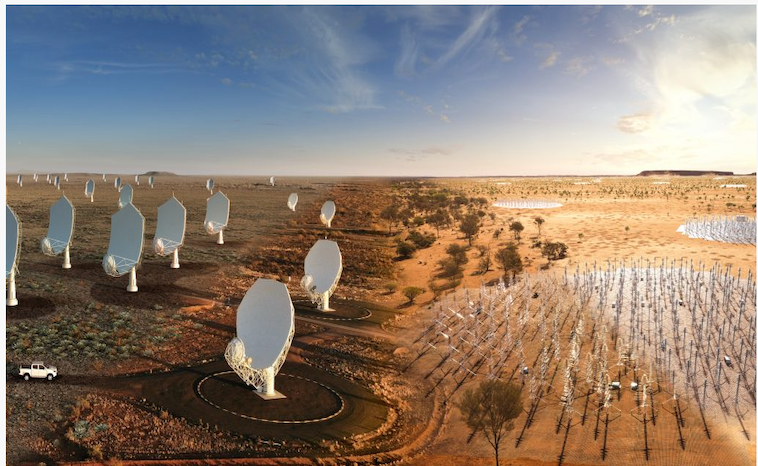 The image shows a close-up of the dishes and also what the dishes, when combined, will eventually look like. (Credit SKA 2021)

The SKA will eventually use thousands of dishes and up to a million low-frequency antennas. These will enable astronomers to monitor the sky in unprecedented detail. Furthermore, they can survey the entire sky much faster than any system currently in existence. Engineers state that their configurations will surpass the image resolution of the Hubble Space Telescope.

Why did they choose South Africa and Australia? Both South Africa’s Karoo and Western Australia’s Murchison Shire were chosen because of their remote locations. In addition, these locations have radio quietness. This means that other objects will not interfere with the radio frequency.

South Africa’s Karoo will host the core of the high and mid-frequency dishes. These will extend over the African continent. Australia’s Murchison Shire will host the low-frequency antennas. Scientists will need two supercomputers to run the SKA Observatory.

The SKA’s low-frequency telescope will include 512 stations arranged in a large core with three spiral arms in Australia. They will spread over a distance of 65km. In addition, each station will contain 256 individual antennas, representing more than 130,000 antennas in total.

The construction phase will take eight years to complete. Scientists plan to have it completed by 2029. They believe they can start preliminary observation by 2024.