In the 1940s scientists figured out how to make it rain in a lab. Now they can do it outside. Read on to learn more about seeding the clouds for precipitation.

The concept is quite simple, add things to clouds to make it rain or snow. Why would scientists want to do this? Does it work? Scientists have been seeding clouds since the 1940s. In the 1940s, atmospheric scientist Bernard Vonnegut figured out how to make snow in a lab. First, he found that particles of silver iodide can cause supercool clouds of water vapor to freeze. Once frozen, these clouds produced snow. Using silver iodine as a scaffold, water molecules line themselves into a crystalline state. A crystalline means that the water is frozen.

How To Control The Clouds

Once they figured how to make snow in the lab, how did they get it to work in the clouds? Scientists must know the water droplet size in clouds in real time. Without that knowledge, they could not calculate the amount of silver iodine needed. Furthermore, they did not know how a cloud evolves after seeding. A breakthrough in technology has given them a chance they needed to put their lab experiment into practice. Katja Friedrich, an atmospheric scientist at the University of Colorado, used two small planes to fly through a bank of clouds in Idaho. They launched one aircraft that made laps between two ground-based radars, dropping canisters that spread silver iodide into the clouds. The same plane also flew through the cloud while streaming silver iodide from its wings. Another plane loaded with cloud measuring equipment paced a perpendicular path to take readings.

At first, nothing happened, then after some time, the water droplets started to react to the silver iodine. The cloud’s water particles grew more prominent as they hit the silver iodide and froze. After a couple of hours, the snowflakes had increased from a few microns in diameter to 8 millimeters. At 8 millimeters, the water became snow and fell to the ground. 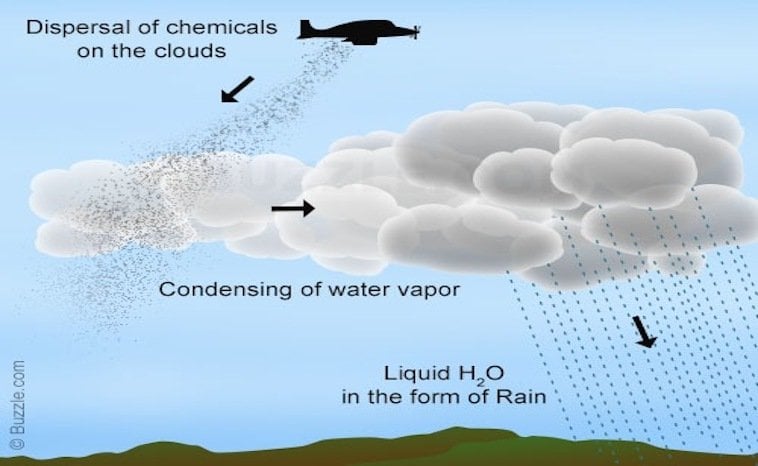 Why Seed the Clouds?

Governments around the world work to use cloud seeding to help bring rainfall to their drier regions. However, some people like the idea and yet others are opposed.

Reasons to Not Seed:

The Earth and its atmosphere have been changing and evolving for thousands of years. Whether seeding the clouds is a good idea or not, is yet to be seen. Only time will tell what the real effects are of seeding the clouds.