Everybody loves Saturn. This gas giant is the second largest planet in our solar system. But what do we really know about Saturn? We know it has many rings that circle around and around in a never-ending loop. But did you know Saturn is so light it could actually float in water? Or that this planet has A LOT of moons? Let’s take a spin around Saturn for a close-up look at all this awesome planet has to offer…It simply “rings” with amazing facts.

Saturn is one giant planet. It is about 75,000 miles in diameter (120,000 kilometers)! That means about nine of our Earths could fit side-by-side across Saturn. Whoa! 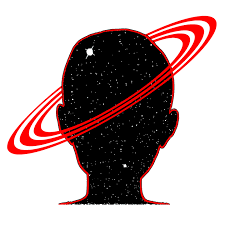 Saturn is mostly made up of mostly liquid and gas with a very rocky core. If you had a body of water large enough, Saturn could actually float on it. However, you would never be able to stand on this “gassy” planet, because you would sink.

One year on Saturn is 29.5 Earth years. That is how long it takes Saturn to orbit around the Sun!

Let’s Look at Those Rings

Did you know you can actually see the rings of Saturn through a small telescope? If you had a huge telescope, you would be able to make out some of the individual rings around Saturn. 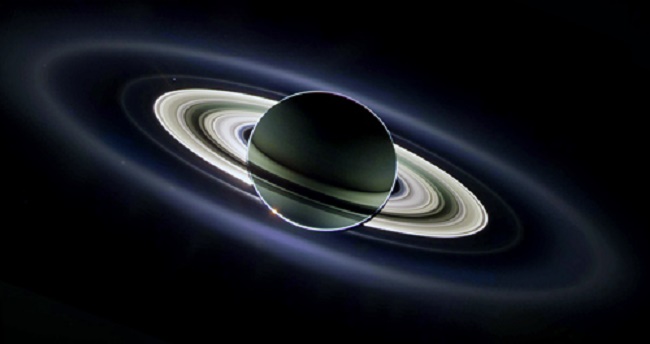 Saturn has seven rings that span around 150,000 miles in diameter (242,000 kilometers). You might think the rings are made up of solid material, but there are actually millions of chunks of water-ice and dust. These icy chunks range in size from a tiny spec-sized piece all the way up to half-a-mile long (1 kilometer)!

The answer is yes. Because Saturn’s equator is tipped at a 27 degrees (ours is 23 degrees) it will pass around the Sun causing each season to spend more or less time in the Sun. This is what makes our days here on Earth longer (summertime) and shorter (wintertime).

Saturn is located 856 million miles (1,377 million kilometers) away from the Sun!

It’s Time to Get Moony

We mentioned before that Saturn has A LOT of moons. It’s true. To date there have been 30 moons discovered orbiting around Saturn, 18 of them have been named. 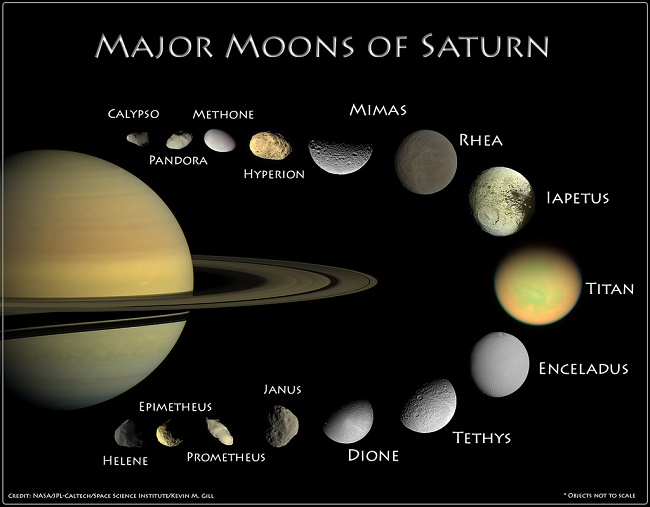 The biggest moon of Saturn is named Titan. This big guy is about 1,600 miles in diameter (2,576 kilometers). It is also the second largest moon in the entire solar system.

How much would you weigh on Saturn? Check out What is Your Planetary Person?

Now that we’ve taken a ring around Saturn, you can go and astound all your friends and family with your vast knowledge. If you want more fun stuff about Saturn, check out this video.