Researchers from Technical University Delft have designed a way for robots to create underground habitats on Mars. What would these habitats look like and what materials would they use?

Although NASA has sent several rovers to Mars, they have yet to send humans. Why? Several reasons exist, like the need for improved transport to Mars and habitats for when humans do arrive. Researchers have released a report that says they can use swarms of robots to build underground habitats for humans. The habitats would allow surface exploration and protect from long-term radiation exposure.

The idea for humans to live subsurface is not new. Other researchers have developed concepts for living on the side of hills in caves. It’s getting to what will work best that drives plans for these habitats. The European Space Agency put forward grants for ideas on how to make underground habitats. Students at the Robotic Building lab (RB) at TU Delft focused on off-Earth construction resources. The students were led in their research by directed by Dr. Henriette Bier. They worked together with experts in material science, robotics, and aerospace engineering to create their proposal. The European Space Agency liked their idea and gave them a grant of €100k to develop a sample habitat. 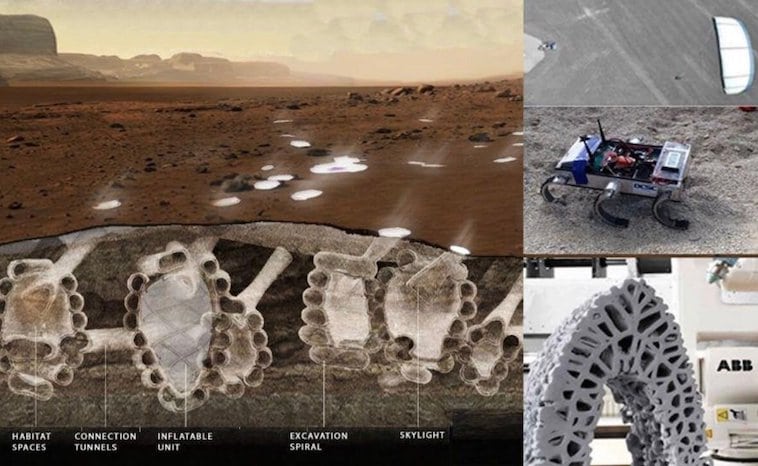 Concept of an underground habitat and the robots and energy sources that will build and power it. Credit: Bier et al.

Utilizing the robotics lab, the proposal seeks to do the following.

All of these concepts lead to the same conclusion. Humans will live either in caves on the sides of hills or several meters below the Martian surface in the years of early exploration. However they achieve their goals, let us hope their structures will keep humans safe.