Looking up at the moon one night you may notice a white ring seeming to glow around the moon. This strange phenomenon can also occur opposite the moon as a moonbow. Also known as a 22° halo, this happens about 100 days out of the year. Where does it come from?

When moonlight passes through thin clouds of ice crystals high in Earth’s atmosphere this ring appears. Consequently, the light bends similar to light bending through a lens, and the shape of the ice crystals focus the moonlight into a ring. On the other hand, a rainbow occurs when water droplets bend sunlight to create a rainbow. Superstition suggests that rain or snow will fall shortly. 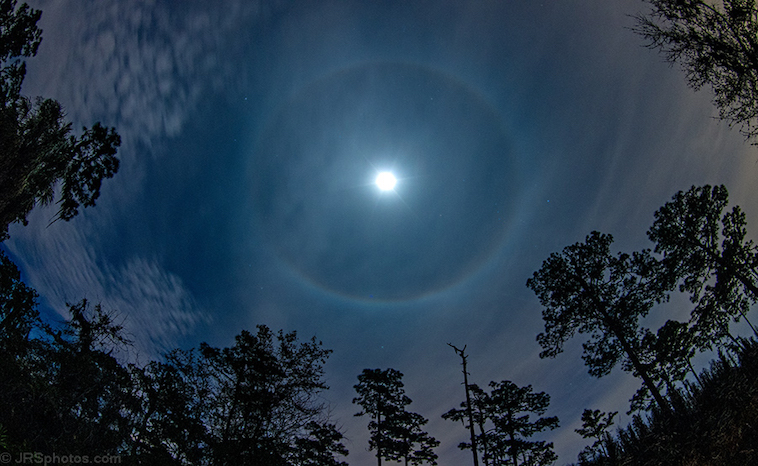 The ancient Greek philosopher Aristotle also recorded the sighting of moonbows in his book Meteorologia. He knew that they were extremely rare and that he only saw two in 50 years.

“The rainbow is seen by day, and it was formerly thought that it never appeared by night as a moon rainbow. This opinion was due to the rarity of the occurrence. It was not observed, for though it does happen it does so rarely. The reason is that the colors are not so easy to see in the dark and that many other conditions must coincide.  And all that in a single day in the month. For if there is to be one it must be at full moon. And then as the moon is either rising or setting. So we have only met with two instances of a moon rainbow in more than fifty years.” (Aristotle, Meteorologia)

Many lyrics relate to lousy weather and the presence of a moon ring.

“If the moon show a silver shield,
Be not afraid to reap your field;
But if she rises haloed round,
Soon we’ll tread on deluged ground.”

The Scottish have their version of bad weather folklore.

“When round the moon there is a bruoh,
the weather will be cold and rough.”

According to Weather Lore, “The further the ‘burr’ or halo appears from the moon, the nearer at hand is the coming rain.” Where did people get the idea that the moon foretells rain? Science tells us that the ice crystals at high altitudes refract the light. Incidentally, Cirrostratus clouds form at high elevations reaching between 18,000 and 42,000 feet.  These clouds usually appear 24-48 hours before the onset of rain from an approaching low front.

All things considered, seeing a ring around the moon on a clear night is quite impressive. Do not think that a ring must appear near the moon for it to rain. Rain will fall regardless of the presence of the ring. What other weather lore or superstitions do you know? Here is one that is quite familiar.

The science behind, “red sky at night” means that high pressure and stable air are approaching from the west and good weather will follow. On the other hand, “red sky in the morning” indicates that the high pressure has passed and bad weather is coming in.

These fun and exciting phenomena will continue to give us pause and hopefully encourage us to learn more every day about the Earth, the moon, and the stars above.