In December 1980, servicemen stationed at the Woodbridge Royal Air Force station in Suffolk County, England witnessed what they believed to be a UFO. Read on to learn more about this incident and see if you agree with their conclusion.

On December 26, 1980, military personnel at the twin bases of RAF Bentwaters and RAF Woodbridge in Suffolk County, England, saw a strange light in Rendlesham Forest, which lies between the two bases. The incident became known as the Rendlesham UFO Incident. Some people refer to it as Britain’s Roswell. This is a reference to the American Roswell New Mexico Incident in 1947.

During the time of the incident, the United States Air Force servicemen used the RAF Woodbridge base. While out on patrol, the servicemen saw lights in the nearby Rendlesham Forest. They initially thought an aircraft had crashed and decided to investigate further. However, upon entering the woods, what they saw instead, was a metallic glowing object with lights. As they tried to approach the object, it slowly moved through the trees. The servicemen left the forest and called local police. When the police arrived, they could not see the object. They stated that the only lights appearing that night were from a lighthouse located five miles away. The police left only to return later that morning.

Why the second phone call? Upon returning to the forest to investigate further, the servicemen found strange triangular impressions in the ground. Furthermore, they found burn marks and broken branches on trees near the impressions.

Two nights later, Deputy Base Commander, Lieutenant Colonel Charles Halt, returned to the forest with several servicemen. They went to take radiation readings in hopes of dismissing the earlier encounter as a misunderstanding. He found several small readings of radiation activity in the original area near the impression and half-mile away from the landing site.

It was at this time that Lieutenant Colonel Halt had his encounter. 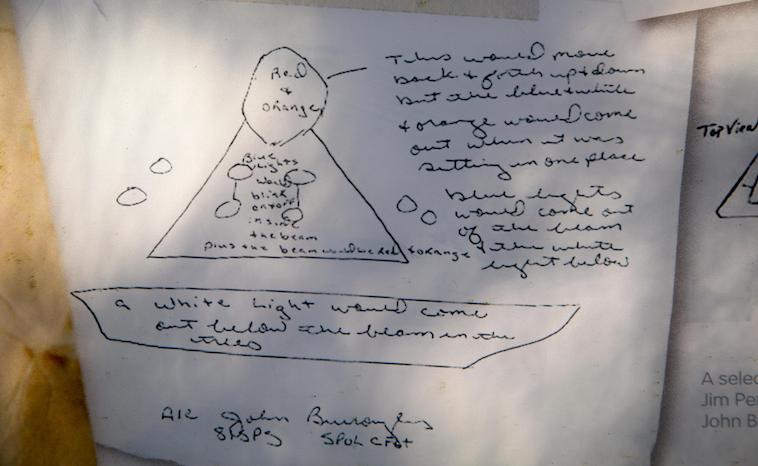 The deputy base commander, Lt. Col. Charles I. Halt, wrote the following memo to the Ministry of Defence.

“Early in the morning of 27 Dec 80 (approximately 0300L) two USAF security police patrolmen saw unusual lights outside the back gate at RAF Woodbridge. Thinking an aircraft might have crashed or been forced down, they called for permission to go outside the gate to investigate. The on-duty flight chief responded and allowed three patrolmen to proceed on foot. The individuals reported seeing a strange glowing object in the forest.

The object was described as being metallic in appearance and triangular in shape, approximately two to three meters across the base and approximately two meters high. It illuminated the entire forest with white light. The object itself had a pulsing red light on top and a bank(s) of blue lights underneath. The object was hovering or on legs. As the patrolmen approached the object, it maneuvered through the trees and disappeared. At this time the animals on a nearby farm went into a frenzy. They briefly sighted the object approximately an hour later near the back gate.”

People have tried to explain away the incident as a hoax or misunderstanding. Witness interviews reported what they thought they saw a fireball. Some speculated that the flashing light seen from the forest lay in the same direction as the Orfordness Lighthouse. With regard to the impressions in the dirt, they were dismissed as animal tracks.

One of the witnesses, Ed Cabansag, said in his statement: “We figured the lights were coming from past the forest since nothing was visible when we passed through the woody forest. We would see a glowing near the beacon light, but as we got closer we found it to be a lit-up farmhouse. When we got to a vantage point where we could determine that what we were chasing was only a beacon light off in the distance.” Another participant, John Burroughs, also stated: “We could see a beacon going around so we went towards it. We followed it for about two miles [3 km] before we could [see] it was coming from a lighthouse.”

We may never know exactly what the servicemen saw in December 1980. It remains a mystery still today.