Who was Percival Lowell and what did he contribute to the science of astronomy? Read on to learn more about this American astronomer.

In the late 1800s, an American astronomer by the name of Percival Lowell excited people with his claims of life on Mars. He believed he could see canals, water, and concluded that life indeed existed. His ideas turned into books, and people talked about Martians as if they were living creatures. However, other astronomers could not see these canals. Lowell defended his work, citing the discovery of another astronomer named Giovanni Schiaparelli.

In late 1877, an Italian astronomer named Giovanni Schiaparelli studied Mars through an 8.75-inch (0.2-meters) telescope. Schiaparelli drew and wrote about canali, an Italian word meaning channels. Unfortunately, the word was translated to “canals” in English. People everywhere thought that Mars had canals with water. Therefore, Schiaparelli’s studies became known and reported as channels that crisscrossed the surface of Mars. Historians believe that the construction of the Suez Canal several years prior caused the error in translation.

This observation excited Percival Lowell and fueled his developing passion for astronomy. He soon learned of an upcoming astronomical event that would allow him to see these canals for himself. Lowell planned to build an observatory to see the canals that Schiaparelli observed. His observatory would enable him to witness an event known as a Mars Opposition. Every couple of years, Mars, the Sun, and Earth line up with Earth in the middle. As a result, the opposition brings the planet Mars quite close to the Earth. 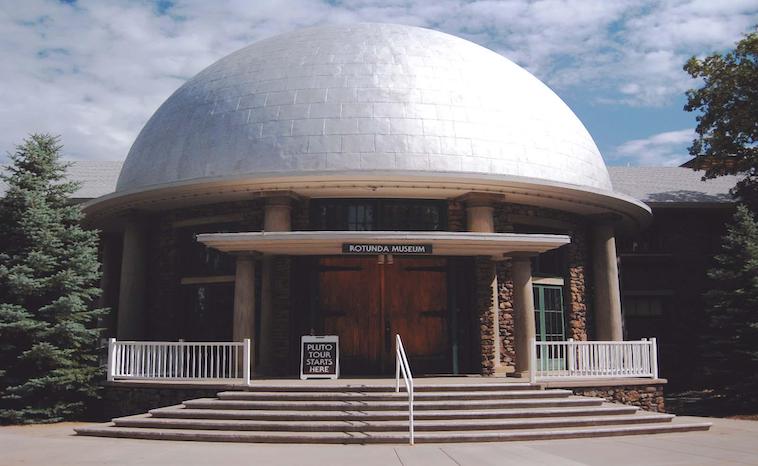 In search of the ideal place to study Mars, he selected Flagstaff, Arizona, where the high altitude, thin atmosphere, and remote location would give him a good view of the planet. There, he built Lowell Observatory on Mars Hill. During the opposition, Lowell sketched the surface of Mars as it drew near. What he found — or thought he found — electrified him.

It did not take long for Mr. Lowell to report that he too saw canals and further, oases on the red planet. The long straight lines he sketched and described were not natural features but channels of water cut by a dying civilization, he claimed. Variations in brightness were caused by increased vegetation as water flow increased throughout the year.

The idea of intelligent beings on Mars quickly caught on in the public imagination, fueled by Lowell’s abundant enthusiasm. He delivered a series of lectures on the canals and the society that constructed them. In addition, he wrote three books. The three books were titled — “Mars” (1895), “Mars and Its Canals” (1906), and “Mars As the Abode of Life” (1908). These books were also followed up with articles regarding the red planet.

What Did Lowell Observe?

Unfortunately, Mr. Lowell did not observe canals and oases. NASA’s Mariner missions by NASA disproved Lowell’s canals. In 1965, Mariner 4 took close-up pictures of Mars, and in 1972, Mariner 9 mapped it. It found no evidence of canals.

Lowell mapped features on Venus, as well, though later observations revealed that none could be seen through the planet’s thick atmosphere. Most likely, the features Lowell spotted on both bodies were the result of an optical illusion caused by his telescope. In the early 20th century, the amateur astronomer calculated the variations in the orbits of Neptune and Uranus. He concluded that the ninth planet, known as planet X, caused these variations.

In 1930, astronomer Clyde Tombaugh, employed at the observatory, noticed movement in photos taken at different times. As a result, he found that Mr. Lowell had discovered the planet, Pluto. The symbol for Pluto represents the initials of Percival Lowell. Sadly, Mr. Lowell never knew he found Pluto. He died 14 years before the research of Mr. Tombaugh.

Today, the Lowell Observatory is still in operation, and the public can tour the facility. People often credit Percival Lowell with the extraordinary interest that the public has today with the planet Mars.