What is the Laser Interferometer Gravitational-Wave Observatory? Read on to learn about how this observatory is changing what we know about space.

In 2017, astronomers detected gravitational waves from a merger of two neutron stars. How did they detect this event? With the help of two Laser Interferometer Gravitational Wave Observatories (LIGO) located in the United States. A similar observatory, known as VIRGO, located in Europe, also participates in the detection of gravitational waves.

How Does and Interferometer Work?

In 1887, Albert Michelson invented the device we refer to as an interferometer. He designed it to prove whether or not Luminiferous Aether existed in space. Luminiferous Aether was thought to be a medium in which light was carried through space. Furthermore, Michelson’s device disproved this theory and in 1920 scientists confirmed his results. An interferometer works by merging two or more sources of light to create an interference pattern. Afterward, the pattern can be measured and analyzed. Lasers enabled interferometers to measure microscopic measurements. In fact, LIGO’s interferometers can measure wave distances at 1/10,000th the width of a proton. (Caltech, 2018)

Furthermore,  the basic structure of LIGO’s interferometers differs little from the interferometer that Michelson designed over 125 years ago. Today, interferometers measure everything from microscopic organisms to enormous areas of space to gravitational waves. 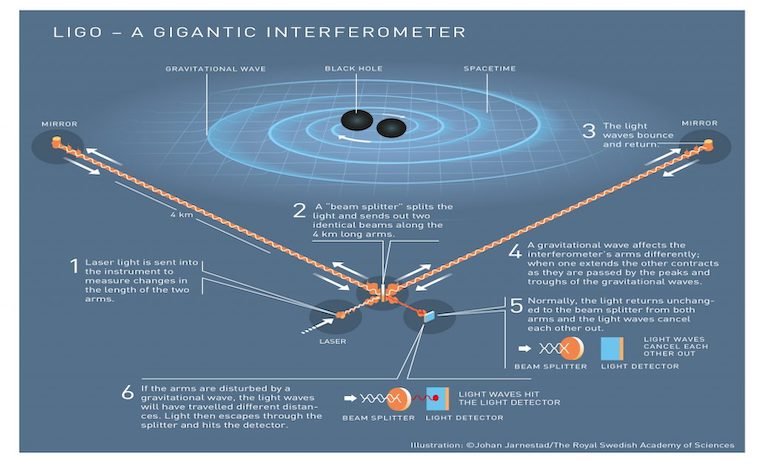 A LIGO unit consists of a laser, a beam splitter, mirrors, and photodetector.

In ‘merging,’ the light waves go on to the photodetector. From here on, the photodetector measures the brightness of the combined beam. When two beams of a laser-light merge, they generate an interference pattern that depends on how well-aligned the light waves are when they combine. However, if for some reason the lasers don’t each travel the same distance, their light waves no longer align when they meet up again. What does this mean? It means that gravitational waves impacted the travel of light.

In an interferometer, any change in light intensity indicates that something happened to change the distance traveled by one or both laser beams. Moreover, the interference pattern can be used to calculate precisely how much change in length occurred.

LIGO’s interferometers have arms 4 km (2.5 mi.) long. In addition, the arms measure 360 times larger than the ones used in the Michelson-Morley experiment (which had arms 11 m (33 feet) long). This is particularly important in the search for gravitational waves because the longer the arms of an interferometer, the farther the laser travels, and the more sensitive the instrument becomes. (Caltech, 2018) The Europeans have plans for the Einstein telescope with detection arms 10km long. Again, the longer the arms, the better their ability to detect gravitational waves. The ESA’s space-based LISA will also use lasers to measure objects in space.

It has taken over 100 years for Albert Michelson’s interferometer to come into its full potential. We look forward to seeing the results of his amazing invention for years to come.