The European Southern Observatory captured the formation of a planetary system forming using their Very Large Telescope (VLT). Read more to learn about this new system and the special tools that made this observation possible.

What happens when you combine a Very Large Telescope (VLT) with special space technology tools? You discover a newborn planet. In July 2018, astronomers at the Max Planck Institute for Astronomy in Heidelberg, Germany used the European Southern Observatory in Chile to detect planet PDS 70B. Furthermore, they found the planet next to a dwarf star.

ESO operates three unique sites in the Atacama Desert region of Chile. The sites, known as La Silla, Paranal, and Chajnantor all have world-class capabilities. ESO’s first site is at La Silla, a 2400 m high mountain 600 km north of Santiago de Chile. La Silla has several optical telescopes with mirror diameters of up to 3.6 meters. The 3.5-metre New Technology Telescope has a computer-controlled main mirror. This new technology now works on many of the world’s current large telescopes.

Paranal is home to the Very Large Telescope array (VLT). This remains the flagship facility for European astronomy. Paranal is situated about 130 km south of Antofagasta in Chile. The VLT has four Unit Telescopes. Each has a main mirror measuring 8.meterses in diameter. With one Unit Telescope, images of celestial objects as faint as magnitude 30 have been obtained in a one-hour exposure. As a result, scientists can see objects four billion times fainter than those seen with the naked eye. (ESO 2018)

In addition, they use the VLT as a giant optical interferometer. This means that the telescope can see near-infrared wavelengths. This makes it an important tool when looking for new stars.SPHERE, a planet-hunting instrument on ESO’s VLT, captured the first confirmed image of a planet forming near a young star.

The newborn planet, PDS70B, currently travels through gas and dust around the very young star PDS 70. In addition, scientists believe that the atmosphere of the planet appears cloudy. How far from the star does planet PDS70B circle? PDS70B resides roughly three billion kilometers from the central star. To put it into perspective, Uranus and the Sun have about the same distance. The analysis shows that PDS 70b is a giant gas planet with a mass a few times that of Jupiter. The planet’s surface has a temperature of around 1000°C. As it stands now, nothing else in our solar system comes close to that kind of temperature. 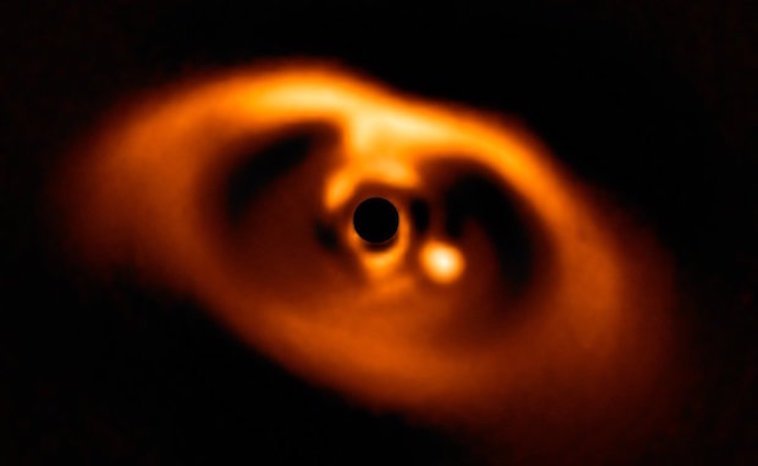 The dark region at the center of the image is due to a coronagraph. A coronagraph tool attaches to the telescope. It blocks out the direct light from a star so scientists can see nearby objects. Without the coronagraph, the bright glare from the star would make it impossible for them to see anything. Without this mask, the faint light from the planet would be utterly overwhelmed by the intense brightness of PDS 70.

Thomas Henning, director at the Max Planck Institute for Astronomy and leader of the teams, summarises the scientific adventure: “After more than a decade of enormous efforts to build this high-tech machine, now SPHERE enables us to reap the harvest with the discovery of baby planets!” We look forward to the discovery of more planets in the future.