Have you ever looked into the nighttime sky to see constellations of fish, bears, or ancient Greek heroes? Astronomy experts have recently added some new exciting constellations. Read on to find out who and what now fills the night sky.

Where did our modern constellations come from? Who created them? Our current constellation system comes to us from the ancient Greeks. A poem called Phaenomena, written by the Greek Poet Aratus in 270 BC, includes a reference to constellations. We know that the man had already named some of the star groupings in the sky.

Three and a half thousand years ago, the tiny Aegean island of Thera fell due to a massive volcanic eruption. This devastating explosion forced the Minoans from the island where they later settled in Egypt. The Minoans had trading contact with the Babylonians. As a result, researchers believe that the Egyptians learned of the constellations from this influx of people.

In 150 A.D., the Greek scientist Ptolemy published a book, known by its Arabic name, The Almagest, which contained a summary of Greek astronomical knowledge. It also included a catalog of 1022 stars. Ptolemy estimated the star’s brightness and arranged them into 48 constellations. These 48 formed the basis for our modern constellation system.

Later astronomers added constellations to fill in the sky. Ptolemy had left gaps and also left out the regions near the south celestial pole. Major contributors of new constellations included Dutch cartographer Gerardus Mercator in 1551 and Pieter Keyser and Frederick de Hautmann. Merchants traveling aboard ships bound for trading in the East Indies also mapped the night sky. During the 1600s they mapped the southern sky.  Polish astronomer Johannes Hevelius in 1690, and French astronomer Nicolas Louis de Lacaille in the 1750s, filled in the remaining gaps in the northern and southern skies.

What new constellations did The University of Birmingham create? 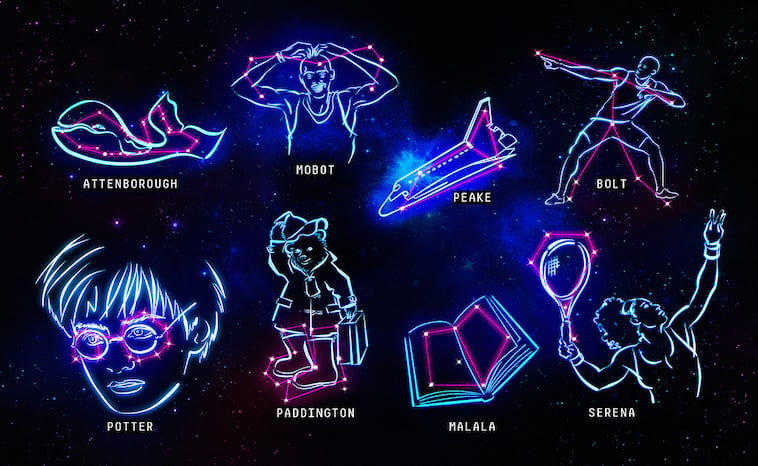 The addition of famous names and characters may encourage a younger generation of observers to look toward the night sky. Although they may be unable to recognize Greek heroes and Gods from current constellations, these new constellations are modern and fun. Researchers hope these new creations will help people of all ages develop their interest in space and astronomy, working to inspire the next generation of astronomers to take an interest in the field.