In October 2021, NASA will launch its LUCY spacecraft will embark on a 12-year mission to study asteroids. Read on to learn more about LUCY’s destination and what NASA hopes to learn.

NASA wants to learn more about the asteroids surrounding Jupiter, better known as the Trojans, and a main-belt asteroid. To accomplish this, NASA is launching its LUCY Asteroid spacecraft to study these asteroids. Lucy will be the first space mission to study the Trojans. The mission takes its name from the fossilized human ancestor whose skeleton provided a unique insight into humanity’s evolution.

Scientists believe that planets were built from solid materials orbiting the sun. Over time, these materials came together under a gravitational attraction. Primitive objects, like the Trojan asteroids that orbit in front of and behind Jupiter, may provide scientists with information about how the planets formed. Furthermore, they believe that ancient asteroids may have impacted the Earth’s oceans and atmosphere.

2025- Lucy will fly by the inner main-belt asteroid 52246, Donald Johanson. Scientists picked his name because he discovered the Lucy hominin fossil.

2027- It will arrive at the L4 Trojan cloud, a group of asteroids about 60° ahead of Jupiter, where it will fly by four Trojans. Scientists have identified specific types of asteroids. For example, the dark-red P- and D-type Trojans resemble those found in the Kuiper Belt of icy bodies extending beyond Neptune’s orbit. In addition, they have found C-types most commonly found in the Main Belt of asteroids’ outer parts, between Mars and Jupiter. Scientists believe that all of the Trojans have dark carbon compounds. Below an insulating blanket of dust, they are probably rich in water and other volatile substances. (NASA, 2021)

2033- Lucy will travel to the L5 Trojan cloud, which trails about 60° behind Jupiter. During this time, the spacecraft will visit the Trojan 617 Patroclus with its satellite Menoetius.

After its visits with Patroclus and Menoetius, Lucy will remain in a stable orbit. At this point, NASA will decide whether or not to extend the mission.

NASA’s scientists are excited about this mission.

“Lucy is an amazing spacecraft, but I’m always looking forward to the day when we start getting data from these never before seen fossils of the solar system,” says Lucy principal investigator Hal Levison. 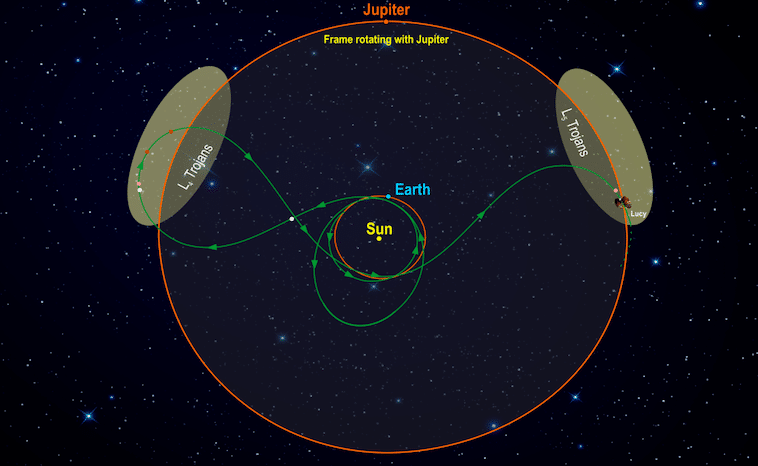 Lucy’s payload will carry several types of instruments including, a high-resolution visible imager, an optical and near-infrared imaging spectrometer, and a thermal infrared spectrometer.

Lucy’s Long Range Reconnaissance Imager (L’LORRI) is sometimes referred to as Lucy’s “eagle eyes.”  It has the highest spatial resolution of all of Lucy’s cameras. This instrument will produce black and white images that will provide the most detailed views of these never-before-seen bodies’ surfaces. In addition, the other instruments will measure silicates, ices, and organics at the surface.  The thermal infrared spectrometer will reveal any thermal characteristics of the asteroids.

“I can’t wait to see the images from this L’LORRI instrument and what they will teach us about the Trojan asteroids,” said Hal Weaver, leader of the instrument team at JPL.

Furthermore, Lucy will carry an instrument for communication. Lucy’s High Gain Antenna will enable spacecraft communication with the Earth for navigation and data collection. In addition, it will take a precise measurement of the masses of the Trojan asteroids.

NASA believes that the Lucy mission will revolutionize our knowledge of planetary origins and the solar system’s formation.