The planet Jupiter has a unique cluster of asteroids that share its orbit around the Sun. Read on to learn more about these asteroids and how scientists believe they formed.

Billions of years ago, when the universe was forming, trillions of pieces of rocks and icy objects flew through space. Some of them fell into Jupiter’s orbit. These objects, named trojan asteroids, have formed into large clusters on the orbital plane Jupiter follows. They both lead and follow the gas giant. These ancient relics have remained trapped in Jupiter’s orbit for billions of years.

In 1906, the first Jupiter trojan discovered, named 588 Achilles, was spotted by German astronomer Max Wolf. Mr. Wolf was an early pioneer in the science of astrophotography. His techniques automated the discovery of asteroids. As a result, asteroid discovery rates sharply increased.

Although Mr. Wolf discovered these asteroids, another scientist predicted their existence in the late 1700s. In 1772, Italian-born mathematician Joseph-Louis Lagrange predicted the Jupiter trojan asteroids. At that time, Mr. Lagrange worked out a theory that a small body sharing an orbit with a planet but lying 60° ahead or behind it will be trapped. The “restricted three-body problem” stated that a body of negligible mass (the “planetoid”) moves under the influence of two massive bodies.

The trapped body will move slowly around the point of equilibrium in a horseshoe. Using this theory, many astronomers looked for these objects surrounding larger planets. Mr. Wolf used this theory as part of his study of Jupiter. 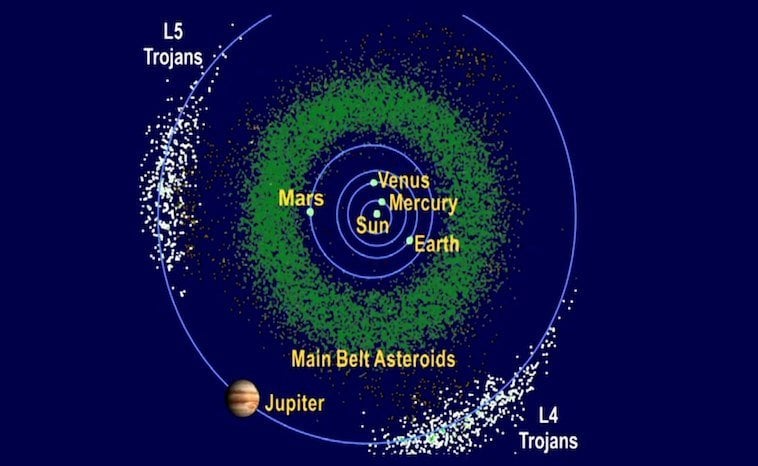 The asteroids got their names from the warriors in the Trojan war. With regards to Jupiter, these leading and trailing points are called the L4 and L5 Lagrange points. The L4 Lagrange points are named for the Greeks. Astronomers believe that the  L4 cluster holds between 160,000–240,000 asteroids. Some of the asteroids have diameters larger than 2 km, and about 600,000 have diameters larger than 1 km.

The L5 are named for the Trojans. Scientists believe that the L5 swarm contains a comparable number of objects. Furthermore, they believe that more than 1 million Jupiter trojans exist greater than 1 km in size or larger.

Since the discovery of Jupiter’s Trojan asteroids, astronomers have searched for Trojan objects of Earth, Mars, Saturn, Uranus, Neptune, and the Earth-Moon system. Scientists doubted their existence because of the gravitational pulls of the planets. However, in 1990 an asteroid later named (5261) Eureka was discovered oscillating about the L5 point of Mars. Since then, eight others have been found, one at L4 and seven at L5.

What keeps Jupiter’s trojan asteroids trapped? Jupiter’s gravitation impacts the trojan asteroid clusters. For years researchers have used earth-based telescopes to look at the asteroids. However, NASA’s new LUCY mission will get them a closer look. During its mission, LUCY will look at seven of these asteroids. Scientists believe that LUCY will unlock some of the mysteries surrounding the origins of the universe. Similar to the way the ancient bones of “Lucy” unlocked mysteries of early humans on Earth.

Slated to launch in October 2021, NASA’s Lucy mission will be the first space mission to study the Trojan asteroids. Scientists hope to find answers to the composition of these early objects in our universe.