In February of this year, NASA’s Perseverance rover will land on Mars and start collecting samples looking for signs of life among other things. To bring these samples back to Earth will take a very specific type of mission. The European Space Agency has contracted with AIRBUS to perform this task. Read on to learn more about the mission and when the samples will make a return trip to Earth.

NASA has plans to send people to Mars sometime before the end of the decade. In order to so safely, they still need to answer questions about the conditions on the Red planet. In addition, they want to know if life did exist at one time. The Perseverance Rover is set to land in February. The rover carries special collection tubes. The European Space Agency has the task of getting the tubes back to Earth. The Mars Sample Return Mission will take place in 2026.

The European Space Agency selected AIRBUS to collect the samples because they have previous experience.

“We’re bringing the full force of our experience gained on Rosetta, Mars Express, Venus Express, Gaia, ATV, BepiColombo, and JUICE to ensure this mission succeeds. Bringing samples back to Earth from Mars will be an extraordinary feat, taking interplanetary science to a new level. Airbus is excited to take on this challenge as part of this joint international mission. ” said Jean-Marc Nasr, Head of Airbus Space Systems.

The AIRBUS team has several steps to complete to make the mission a success. They have to create an orbiter, a Mars Ascent Vehicle (MAV), a Sample Fetch Rover (SFR), and a Sample Transfer Arm (STA). Along with these items, the rover will carry the Capture, Containment, and Return System (CCRS), for bio-sealing the sample tubes.

AIRBUS plans to build a 6 ton, 6 m high spacecraft, equipped with 144m² solar arrays with a span of over 40 m. (AIRBUS, 2021) In addition, a mass-efficient hybrid propulsion system will navigate traveling to Mars. NASA will supply the Earth Entry Vehicle for breaking through Earth’s atmosphere on the return trip. 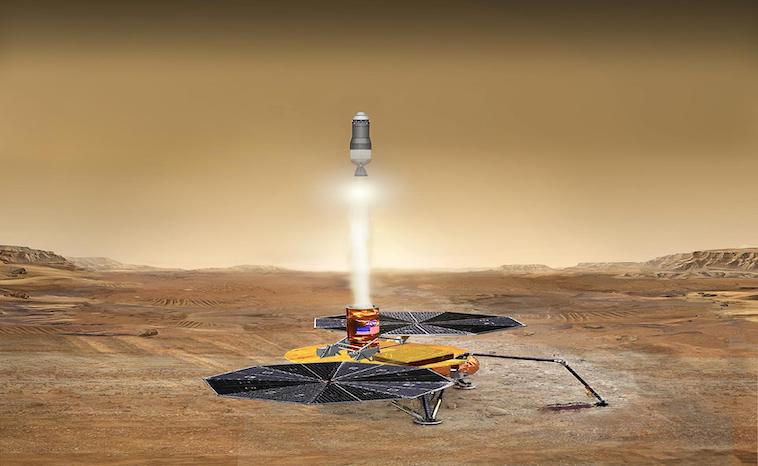 Phases of the Mission

Once the orbiter nears Mars, it needs to communicate with Perseverance to hone in on its location. Once it confirms the location AIRBUS will launch the Mars Ascent Vehicle. They plan to have it land near the Jezero crater, where the sample tubes should be waiting. The Sample Fetch Rover will then move into action navigating and locating the tubes. The Sample Transfer Arm has the job of collecting the tubes and placing them into the special containment system. At this point, the Mars Ascent Vehicle will launch into Mars orbit. With good timing and precision, the orbiter will be meet with the ascent vehicle and capture it.

It will then take another year for the orbiter to make its way back to Earth. Once it nears, the Earth Entry Vehicle will have coordinates dispatched on a precise trajectory. The orbiter will then release the Earth Entry Vehicle and then continue on a path to orbit around the Sun. The trajectory must be precise, or the vehicle will burn up on re-entry. NASA plans to have the vehicle land in the desert of Utah. The samples will then take a trip to the NASA sample receiving and curation facility.

Gathering the tubes 50 million miles from Earth will take much planning. However, a successful mission means that we gain more knowledge about Mars. We may even find out if life existed on the red planet at one time.