Maria Cunitz was a 17th-century German astronomer. Read on to learn more about her contribution to astronomy.

During the 17th century, women were typically denied access to university. However, that did not prevent many women from studying books and learning. Maria Cunitz was born during this time and went on to make great discoveries in astronomy.

Born between 1600 and 1610 in Wohlau, Poland, Maria Cunitz grew up under the guidance of physician father and assumingly self-educated mother. Her mother, Maria Sholtz, was the daughter of German scientist, Anton von Scholtz. Her environment helped her to acquire knowledge not available to many women during that time. Maria was the eldest daughter of Heinrich Cunitz, an open-minded person who educated her in many subject areas. These areas included languages, painting, music, poetry, mathematics, medicine and history. Incredibly she learned seven languages: German, Italian, French, Polish, Latin, Greek and Hebrew. She also became a skilled musician

At the age of 13, Maria got married for the first time. In today’s standards that seems quite young, but during the 17th century, it was not unusual. People did not live long, therefore their lives started much earlier. Her husband died three years later, and in 1630 she married Elie de Loewn. Her second husband was a physician and an amateur astronomer. He encouraged her astronomical studies. Together they observed Venus in December 1627 and Jupiter in April 1628. 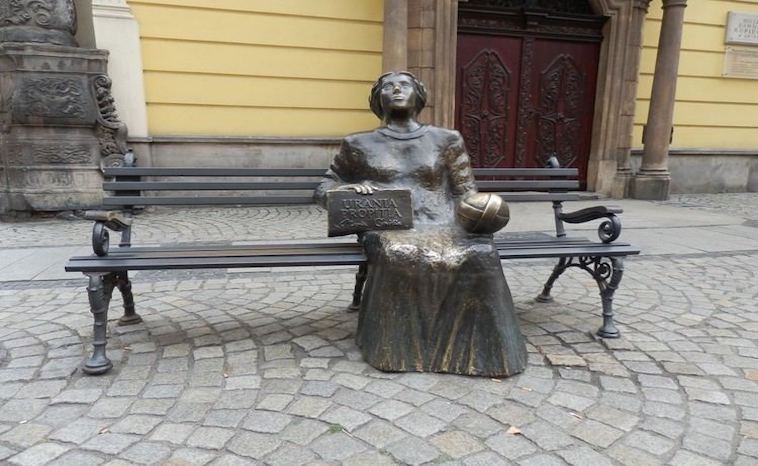 Maria developed a passion for astronomy. She studied and kept records of planetary movements. Unable to acquire the necessary tools needed for deep observation she worked out mathematical problems. Her husband introduced her to important astronomers during that time. She corresponded with prominent scientists, including the famous astronomer Johannes Hevelius of Danzig, and Pierre Gassendi, secretary to the Queen of Poland. She always wrote in her husband’s name and received the replies addressed to him. The conventions of the time made it inappropriate for a woman to exchange letters with a scholar.

One astronomer she followed was German astronomer Johannes Kepler.  Kepler’s work, Tabulae Rudophinae published in 1628, outlined the heliocentric theory. It also included calculations of planetary positions and his new laws based on the elliptical shape of planetary orbits. Maria read his Tabulae Rudophinae and decided to prepare her own version. Her work distinguished her from the other astronomers. She obtained comparable results using algorithms that were simpler, and easier to calculate.

In 1650, Maria paid for and published Urania propitia. It was immediately recognized for its simplicity and access to many Europeans during that time. Significant for a technical publication of that period, her book was written both in Latin and German. Although she did her best for her calculations, she admitted she made some errors. However, none of the contemporary tables from other scientists were without errors. She also corrected several made by Kepler in his work. In the end, the accuracy of her planetary orbits was in many cases better than the ones offered by Kepler.

Maria was acclaimed as the most learned woman in astronomy since Hypatia of Alexandria. This remarkable woman lived during the 400s and was a prominent thinker of the Neoplatonic school in Alexandria. She taught philosophy and astronomy. Many modern scholars also believe that Hypatia may have edited the surviving text of Ptolemy’s Almagest.

Maria Cunitz’s contribution to astronomy led her to provide new tables and a more elegant solution to Kepler’s planetary orbits. Remarkably, she helped advance the study of astronomy.