NASA says that more than 500,000 pieces of space debris orbit around the Earth? Where did the debris come from? What happens to it? Do we know where it is in orbit? Read on to learn more about mapping space debris.

NASA scientists believe that close to 500,000 pieces of space debris orbit the Earth. They classify the debris into two categories, natural and man-made. Orbiting at 17,500 mph, the debris becomes an instant threat to the International Space Station, satellites, and manned spacecraft. Consequently, when they send a manned rocket into space, the location of potential debris crossing paths must be known. How do they know the location of the debris?

Space debris encompasses both natural (meteoroid) and artificial (man-made) particles. Meteoroids are in orbit around the sun, while most artificial debris orbits around the Earth. In addition, man-made orbital debris includes nonfunctional spacecraft, abandoned launch vehicle stages, mission-related debris and fragmentation debris. NASA states that more than 20,000 pieces of debris orbit the Earth that compare in size to a softball. The Department of Defense keeps a catalog of all pieces of debris larger than a softball. 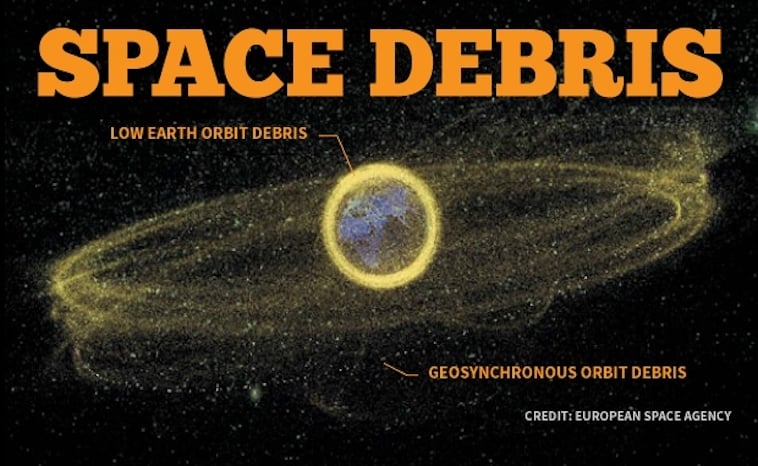 Currently, NASA has 15,000 pieces of debris cataloged, yet they are tracking 21,000 pieces in total. That number fluctuates based on whether an object descends into Earth’s atmosphere and burns up.

Each site has three telescopes that require a precise nighttime sky to track the objects. “The telescopes have a 40-inch (1.02 m) aperture and a two-degree field of view.” (NASA, 2018) Consequently, the telescopes “see” objects 10,000 times dimmer than the human eye can detect. This sensitivity requires a nighttime sky to see satellites reflected light.  As with any ground-based optical system, cloud cover and local weather conditions directly influence its effectiveness. GEODSS system can track objects as small as a basketball more than 20,000 miles (30,000 km) in space or a chair at 35,000 miles (56,000 km).

With each year that passes debris crash into Earth’s atmosphere and burns up while new pieces break apart from old satellites and other man-made objects. This advanced tracking system keeps the International Space Station astronauts safe along with manned spacecraft. Countries and businesses around the world benefit from this project and will continue to further space exploration and advance mankind due to the mapping of space debris.