The Lyrid meteor shower will make its appearance from April 20th to 23rd this year. Read on to learn more about this ancient meteor shower.

Named after constellation Lyra, the Lyrids are one of the oldest recorded meteor showers. According to some Chinese historical texts, the shower was recorded as far back as 687 B.C. They also made a note of it again in 15 B.C. Also, in 1136, a report from Korea reported the Lyrids with the words “many stars flew from the northeast.”

In 1803, residents of Richmond, Virginia, went outside late at night after a fire alarm. A newspaper report from that time noted that the meteors resembled rockets in the sky.

“Shooting stars. This electrical [sic] phenomenon was observed on Wednesday morning last at Richmond and its vicinity, in a manner that alarmed many, and astonished every person that beheld it. From 1 until 3 in the morning, those starry meteors seemed to fall from every point in the heavens, in such numbers as to resemble a shower of skyrockets.”

However, the Lyrid meteor shower did not only appear in a Richmond, Virginia newspaper that month. Newspapers in North Carolina, Delaware, and New Hampshire also documented the showers.

Astronomer E.H. Burritt referred to the Lyrid meteor shower in his book The Geography of the Heavens in 1833. 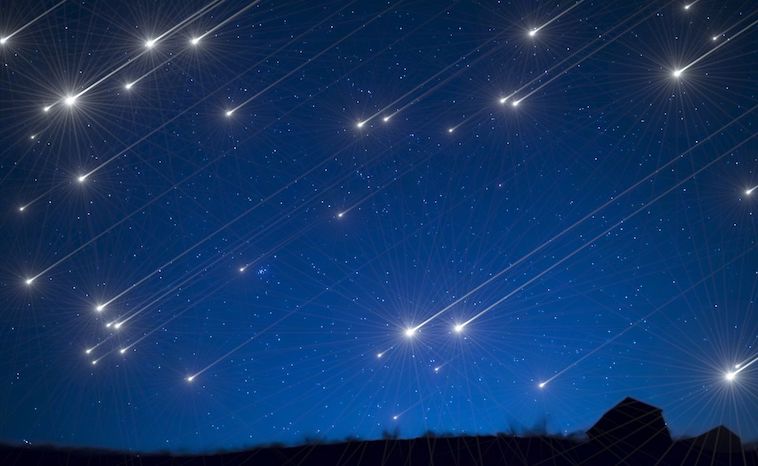 The Lyrids look like they appear to come from the star Vega in the Lyra constellation. In fact, the fireballs in the meteor shower are created by debris from comet Thatcher. What causes debris to fall from Thatcher? Comets break down as the Sun’s heat causes ice and other debris to break off from the core. As a result, it leaves a trail in space. Earth runs into the path once a year and produces the sky show known as the Lyrid meteor shower. Comet Thatcher takes about 415 years to orbit around the Sun. The comet is expected to be visible from Earth again in 2276.

HOW TO SEE THE LYRID METEOR SHOWER

According to meteorologists, one does not need any special equipment or unique skill to view a meteor shower. The most important thing to have is a clear night. It helps to have a healthy dose of patience as well because it takes some time to see the meteors.

If you find that the sky appears overcast one night, try again for another night. The Lyrid meteor showers go on for about nine nights during the month of April. Some years have more meteors than others. So, if this year does not appear too spectacular, try again for next year. You may see a fantastic display of our universe at work.