In 1833 a book named The Geography of the Heavens was written by Elijah Hinsdale Burritt. Read on to learn how this book shared the science of astronomy to people everywhere.

If a person lived in the early 1800s and had a passion for studying the stars, they had a couple of choices. For those that could afford it, they could head off to university and take astronomy courses. However, for those that could not afford it, they had another option. An astronomer named Elijah Hinsdale Burritt gave the less wealthy and educated the same ability to learn about the stars overhead.

What could $1.25 buy you in 1833? If you wanted, it bought you a copy of Elijah Burritts, The Geography of the Heavens. For another $1.25, you could also by the Celestial Atlas to go with it. In today’s dollars, each book would cost about $30. The books became instant bestsellers, and by 1876 over 300,000 copies had sold. What do we know about the astronomer that brought the heavens into people’s living rooms?

Elijah Hinsdale Burritt was born in Britain, Connecticut, in 1794. He was the oldest of 10 children and left home at 18 to become a blacksmith. An unfortunate accident left him unable to learn his trade and turned to astronomy and mathematics. He attended Williams College in Massachusettes from 1816 to 1819. Eventually, he taught at the college and then later moved back home. Elijah, always intent on educating people, opened a day school and observatory. 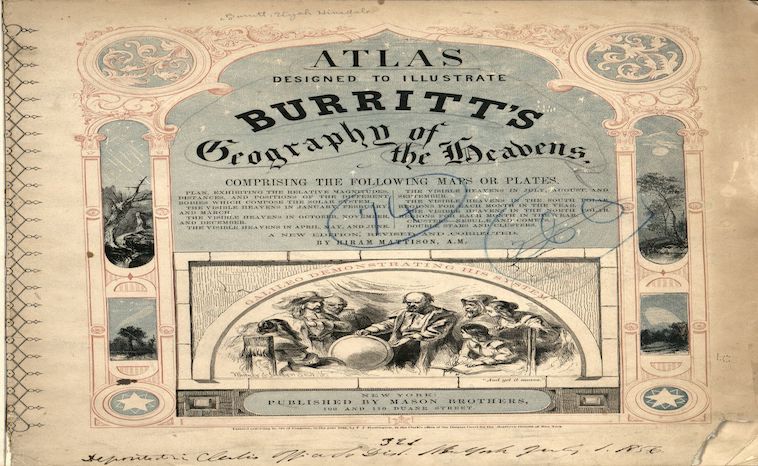 Over several years, he wrote some books and pamphlets on mathematics. In 1821, Burritt wrote a 28-page pamphlet, “Astronomia.” The booklet gave directions for people to find the principal stars in the heavens. He then wrote another book in 1830 that showed how to compute interest.

The Geography of the Heavens with the Atlas made him popular. Why? He explained everything in terms that people could understand. Burritt described the constellations and provided information on their brightest stars and magnitudes. Furthermore, he described the mythology and history associated with the constellations. The most popular feature included the companion Atlas. The Atlas contained seven maps that Burritt drew himself.

However, he did not create the maps. Instead, he copied them from Francis Wollaston’s A Portraiture of the Heavens.

Sadly, Elijah Burritt died in 1838 at the age of 44. However, his Geography of the Heavens continued to sell. His book inspired astronomer Sherburne Wesley Burnham to study the stars. Burnham went on to discover double stars. Double stars are two stars that appear close to each other as viewed from Earth. In 1873 – 1874, Burnham produced a catalog of double stars. He later became a fellow of the Royal Astronomical Society.

The many publications of Elijah Burritt inspired people to look upon the stars. Some of those went on to study astronomy and advance the knowledge of astronomical science. Elijah Burritt may be the forgotten astronomer, but his books continue to inspire to this day.