Our sun travels on a path in space called the ecliptic. Read on to learn more about this imaginary line.

To track the path of the sun, astronomers have created an imaginary line that extends from the Earth thru the Sun. During the year, this line points to each constellation in the Zodiac. The Earth’s plane follows this line as it travels around the sun. As the Earth orbits on this plane, the sun appears to drift across the background of stars. In addition, the ecliptic marks the line which eclipses occur. Astronomers also use this line as a starting point for celestial coordinates.

The Ecliptic Cause for Eclipses

Our moon orbits around the Earth about once every 29 and a half days. Many early civilizations used the Moon’s monthly cycle to measure the passage of time. Men made calendars from the moon’s cycle. The Hebrews, Muslims, and Chinese all used a lunar calendar. We get the word eclipse from the Ecliptic plane of the Earth.

Why don’t we have a lunar eclipse every month? We don’t have a lunar eclipse each month because of the tilt of the moon. The moon tilts at a 5.2-degree angle. As the moon passes through the ecliptic plane of the sun, we get an eclipse. Two times a month, the moon crosses the ecliptic. However, an eclipse will only occur during a full moon or new moon. 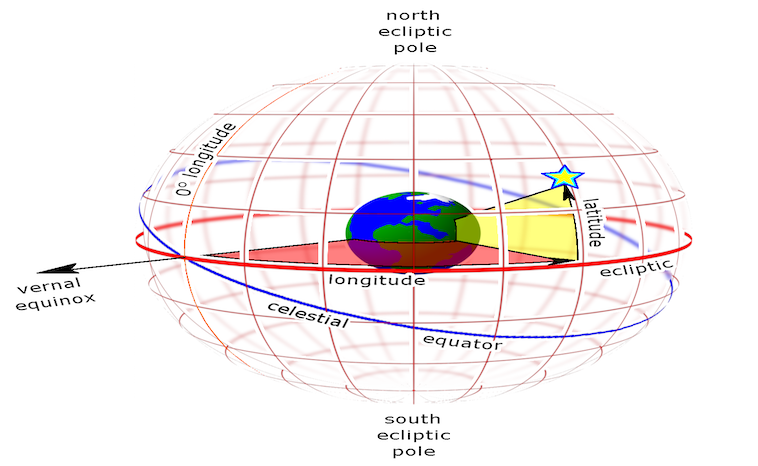 Ecliptic and the Zodiac

Thirteen constellations make up the Zodiac. However, in ancient times, only twelve straddled the ecliptic. Therefore, we only refer to the twelve signs of the zodiac today. Zodiac comes from the Greek word for animal circle.

The ecliptic forms the center of the zodiac. The celestial belt that circles measures about 20 degrees in latitude. As the sun slowly travels through the sky, we can see it move from one Zodiac constellation to the next. Ancient astrologers could figure out the months based on the location of the animals. Each month was assigned a specific animal. Today, however, the signs do not line up with the beginning of a month like they did in ancient times. This is due to the wobble of the Earth’s axis.

The Ecliptic path is exciting to learn about. With an app on your phone or a good star map you can look at see which zodiac animal we are seeing this month.