NASA’s Hubble telescope has spotted a spectacular image on the planet Jupiter. Read on to learn more about this illuminating event.

Auroras are sometimes called the “Northern Lights” here on Earth. What causes these spectacular light shows? Emission lines from gases in Earth’s upper atmosphere glow by a complicated interaction with the solar wind and Earth’s magnetic field. In 2016, the NASA spacecraft Juno observed a stunning light show on Jupiter. What causes this to happen on a planet so very different from our own?

In addition to Jupiter’s unusual Red Spot storm, the planet now has something else for astronomers to study. Using the JADE-Jovian Auroral Distributions Experiment- Ion Instrument, NASA can detect the ions and electrons in Jupiter’s atmosphere.

“These aurorae are very dramatic, and among the most active I have ever seen,” said Jonathan Nichols from the University of Leicester in the United Kingdom. “It almost seems as if Jupiter is throwing a firework party for the imminent arrival of Juno.”

Juno and Hubble Working Together

In addition to the information collected by Juno, NASA is using the Hubble telescope to track aurora changes.  Using a series of far-ultraviolet images from Hubble’s Space Telescope Imaging Spectrograph, it is possible for scientists to create videos that demonstrate the movement of the vivid aurorae. Can you believe that they cover areas bigger than Earth?

Not only are the aurorae huge, but they are also hundreds of times more energetic than aurorae on Earth. Actually, unlike the Aurora on Earth, they never cease. While on Earth the most intense aurorae are caused by solar storms. When charged particles rain down on the upper atmosphere, it excites gases and causes them to glow red, green, and purple. Jupiter has an additional source for its aurorae. 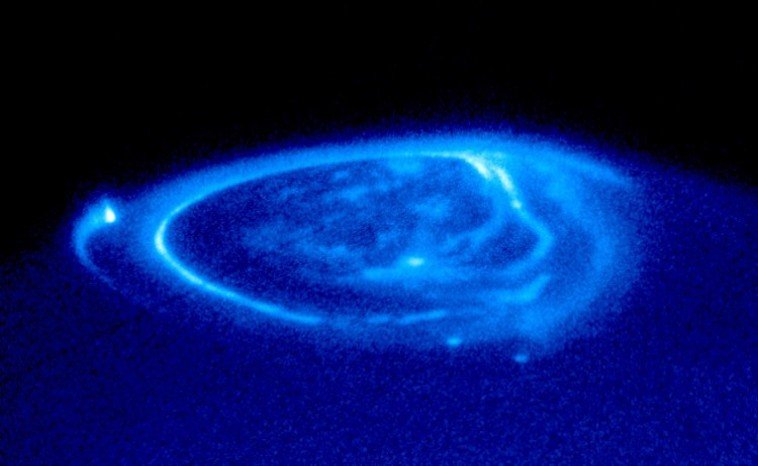 “In this Hubble telescope picture, a curtain of glowing gas wraps around Jupiter’s north pole like a lasso. This curtain of light, called an aurora, is produced when high-energy electrons race along the planet’s magnetic field and into the upper atmosphere where they excite atmospheric gases, causing them to glow. The aurora resembles the same phenomenon that crowns Earth’s polar regions. But this Hubble image, taken in ultraviolet light, also shows the glowing “footprints” of three of Jupiter’s largest moons: Io, Ganymede, and Europa.” (NASA, JUNO PROJECT)

What Powers this Energy?

NASA’s Juno spacecraft spotted electrons firing down into Jupiter’s atmosphere at up to 400,000 volts. That’s an enormous amount of energy that gives rise to the planet’s glowing auroras. On Jupiter, the planet’s super-fast rotation acts as a gigantic electric generator. Astronomers expected the electrons to fire at very high voltages. However, they could never see this happen.  Juno gave astronomers that opportunity for the first time.

In 2018, NASA announced that they would have Juno spend more time observing Jupiter. They added five years to its mission because of the massive amount of information they have learned in the last two years. The new observations and measurements made with Hubble and Juno will help to understand better how the Sun and other sources influence aurorae. We will have to see if other planets have Auroras lighting their poles as well.

DIY: Create your own Christmas star