Did you know that Jupiter’s Red Spot is changing? Read on to learn more about the changes occurring within the storm of this great gas giant.

Humans will probably never visit Jupiter’s atmosphere. Its cloud layers are deathly cold, and the thick layers that are warmer have crushingly high pressure. Oxygen for breathing is not available. Furthermore, the gases are roughly three-quarters hydrogen and quarter helium. In addition, it has small amounts of water vapor, methane, ammonia, and similar molecules. Traces of sulfur and molecules containing sulfur may make it smell bad. Of course, Jupiter has no surface, so there isn’t even a place to stand.

The Great Red Spot is a giant circulating storm in one of the southern zones of the planet. It has lasted three hundred years since astronomers first noticed it after the invention of the telescope. Scientists who study the spot notice that it has been changing. The color has gotten darker, rounder and decreased in size. As the storm shrinks, scientists think that the winds will increase. Imagine an ice skater spinning in a circle. As he pulls in his arms, he starts to spin faster. On the contrary, the storm grows taller and does not spin faster. At one time three Earth’s could fit inside the great red spot. At this point, only one Earth would fit inside the storm cloud. 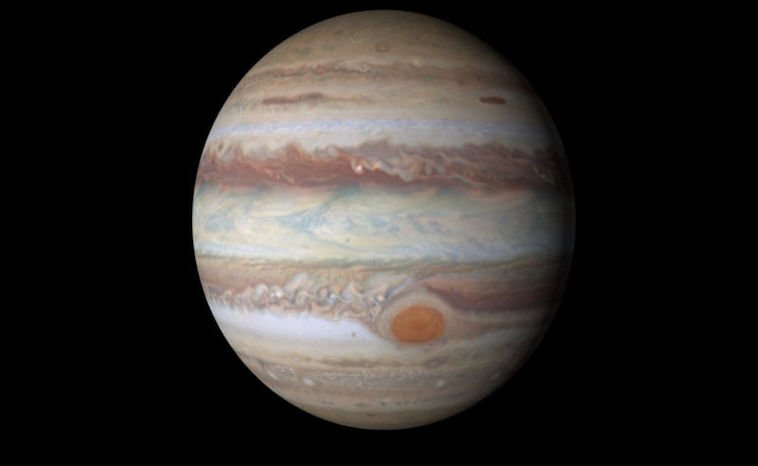 Why do the clouds appear as belts around the planet? On Earth, the temperature difference between the poles and equator drives a wave-shaped high-speed wind. The organizes the high and low-pressure areas into cyclonic circulations. The poles and equator on Jupiter are about the same temperature. Scientists believe that this may be from the heat rising from the interior. Consequently, there is no wave shaped winds. At the same time, the planet’s rapid rotation stretches high and low-pressure areas into belts and zones that circle the planet.

On both Earth and Jupiter, winds circulate clockwise around the high-pressure areas in the northern hemisphere and counterclockwise south of the equator.

Three circulating storms were visible as white ovals since the 1930s merged n 1998 to form a single white oval. In 2006, the storm intensified and turned red like the Great Red Spot. The reason for the red color is unknown. Scientists believe that the storm may be bringing up material from lower in the atmosphere. Storms in Jupiter’s atmosphere may be stable for decades or centuries. Astronomers have never before witnessed the appearance of a new red spot. It may eventually vanish or develop further. Even the Great Red Spot may someday vanish.

Only time will tell what will happen to Jupiter’s Great Red Spot. The coming years will either see it shrink entirely away or widen once again. We will have to patiently wait and see what is to come.