Have you ever tried to throw a ping pong ball into a cup that is spinning on a table at the fair? It is quite hard to do right? When scientists want to bring a rocket back to earth, they try to do the same thing. Read on to find out how scientists land a rocket back on Earth.

How do space engineers know when to launch a rocket? The objects in space constantly move. They either orbit around something else, or move toward or away from it. With the Earth spinning at about 1,000 miles per hour, and the target moving in their orbit around the sun, landing a craft can prove difficult. In order for space engineers and scientists to hit their target, they must consider a number of things. Using the Earth’s rotation actually benefits their efforts by giving them a boost.

At the equator the Earth rotates at 1675 km/h or 1041 m/h. Due to the fact it rotates eastward, space engineers launch the rocket toward the east. They want the spacecraft to head in the same direction as Earth’s orbit around the sun. Once the rocket reaches partway around the Earth, the scientist uses the Engine to boost it out of Earth’s orbit. Scientists determine when to launch based on where the Earth will be in its orbit around the sun. But how do they get the rocket to return to Earth in one piece? 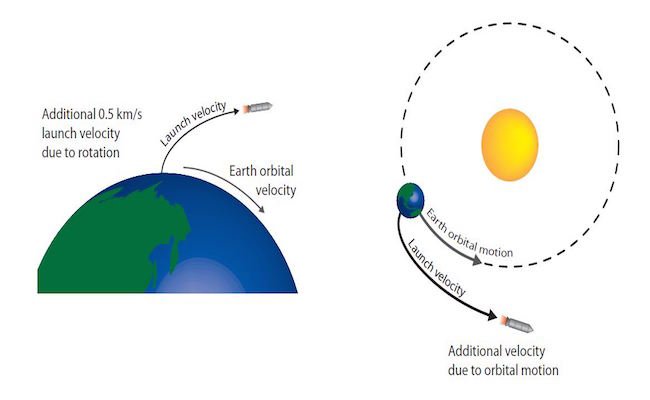 How Do We Get The Rocket Back Home?

SpaceX, a private company created in 2002, manufactures and launches advanced rockets and spacecraft. Due to the high cost in manufacturing rockets, the ability to reuse the booster remains essential. Scientists have figured out how to recover the rocket keeping it intact. Quite impressively, they can recover it on a floating barge in the ocean.

The Falcon 9 uses 2 stages to launch their rocket. Each stage uses a liquid fuel with liquid oxygen. The expensive first stage “booster” of Falcon 9 needs to remain dry and therefore cannot land in the ocean. The sea water would result in damages that would render the booster useless. With advanced technology, the Falcon 9 can flip over and direct itself to land on a ship.

During the descent, the booster reaches speeds of 1,000 m/s. The fins and engine control the speed and direction of the Falcon. Right before landing four legs open up allowing it to make a landing at 6 m/s. Six meters a second may sound fast, but with onboard computers controlling everything, the landing goes smoothly.

Aircraft pilots have difficulty landing on an aircraft carrier out in the ocean. Imagine trying to land a 20 story rocket. Although the boat raises and lowers based on ocean waves, the rocket can land. Once it lands, the legs lock out to keep the rocket upright. SpaceX has landed eight boosters since its first successful attempt in December 2015, including its last four flights.

Plans for the Future

The private company is hoping to create a fleet of reusable rockets that can fly multiple missions to space instead of the one-and-done method in play among traditional launch providers today. NASA scientists hope to use the technology to take off and land from Mars one day. Similar to the concept of NASA Space Shuttles, they plan on launching cargo for clients.

While SpaceX and NASA work to improve rocket recovery, this same technology may one day lead to flying cars. We have flying drones ready to deliver packages to our doorsteps. Maybe we will be able to fly a car across the country some day.