NASA has released a photo of what they describe as the “Greater Pumpkin” galaxies. Read on to learn more about these galaxies captured by the Hubble space telescope.

Just in time for Halloween, NASA’s Hubble telescope captured the image of two galaxies. The picture appears with two glowing eyes and a crooked smile. This formation makes it appear like a giant jack-o-lantern in the night sky. NASA coined the name “Greater Pumpkin” to describe the galaxies. One day these two galaxies will collide and create a new massive spiral galaxy.

Two aging red stars form the eyes of the Greater Pumpkin. These glowing eyes are concentrations of stars around a pair of supermassive black holes. In addition, newborn star clusters make up the crooked blue smile. NASA believes these star clusters start an arm to a spiral galaxy. 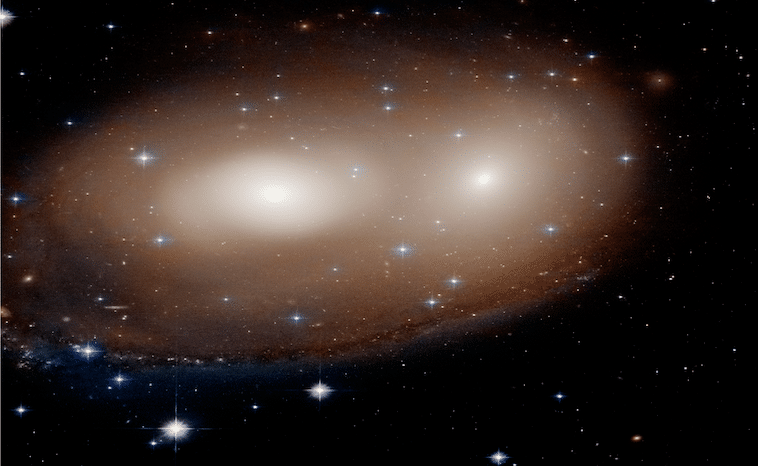 Spiral galaxies are twisted collections of stars and gas. They often have beautiful shapes made up of the formation of hot young stars. For example, our Milky Way Galaxy is an example of a spiral galaxy. In the Greater Pumpkin galaxies, the smile or arm embraces both galaxies. Furthermore, NASA suggests that it likely formed when interstellar gas was compressed as the two galaxies began to merge. However, the spiral galaxy can only form based on a specific trajectory that the colliding galaxy pair follows.

Most of the time, when two galaxies collide, they lose their typical flattened disk shape. The stars within each galaxy get scrambled into a new football-shaped space, NASA said. Eventually, they form an elliptical galaxy.

Currently, the entire “Greater Pumpkin” view stretches nearly 109,000 light-years across. According to NASA, our Milky Way galaxy is about the same diameter.

Will it Reach the size of the Rubin Galaxy?

These galaxies will take millions of years to form into their own spiral disk. However, other things can deter formation. For example, NASA does not know how the Rubin galaxy got so big.  “How it got so big is something we don’t quite know yet,” said Benne Holwerda. “It’s as big as you can make a disk galaxy without hitting anything else in space. Did the monster galaxy gobble up much smaller satellite galaxies over time? Or did it just slowly accrete gas for new stars? “It seems like it’s been puttering along, slowly growing,” Holwerda said. (NASA, 2020)

The Greater Pumpkin galaxies may follow the same blueprint for growing like the Rubin galaxy. Slow and methodical growth over billions of years may one day make it the largest. Only time will tell.

Star Gazer, Astro Lover or Both?