Epsilon Canis Majoris is also known as Adhara, an Arabic word meaning ‘virgins’. It’s the second brightest star in Canis Major and 24th overall in the night sky. However, 4.7 million years-ago Adhara was actually the most luminous in the sky. No other star has ever been this bright, nor is one expected to be for at least five million years.

Adhara is located 430 light-years away in the constellation of Canis Major (the greater dog). This constellation is the 43rd in size (out of the 88) and is home to Sirius (the brightest star in the night sky) and several deep space objects. It also occupies about 380 square degrees in the night sky and belongs to the Orion family of constellations.

This star can be seen in its home constellation located in the second quadrant of the Southern hemisphere, specifically between latitudes of +60 and -90 degrees. Because this star is so bright it can be seen with the unaided eye; however because the primary star is more luminous than the companion you will need a powerful telescope to distinguish between the two. 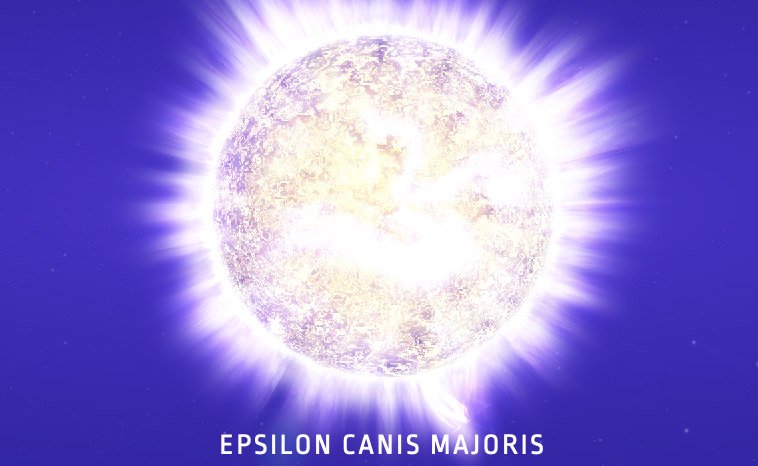 Epsilon Canis Majoris is a binary system with its primary component being a class B2 bright giant. Adhara is also noted for being the brightest extreme ultraviolet source of any known star. It emits 38,700 times more UV rays than the Sun. In addition, the surface temperature of this star is burning at an effective temperature of 22,200 Kelvins or 39,500 degrees Fahrenheit or 21,296 degrees Celsius, which is what gives it its blueish-white color. The companion star is about 250 times dimmer than the primary with an absolute magnitude of +1.9 and an apparent magnitude of +7.5.

Adhara is the second brightest star in Canis Major and 24th overall in the night sky. However, 4.7 million years-ago, this star was actually the most luminous in the sky. It was situated only 34 light-years away and shone with a magnitude of -3.99. No other star has ever been this bright, nor is one expected to be for at least five million years.

Historically, back in the 17th century in the Calendarium of Al Achsasi al Mouakket (catalogue of the stars) Adhara was designated Aoul al Adzari which translates from Latin as Prima Virginum, meaning “First of the Virgins.”

Epsilon Canis Majoris is not just another twinkling celestial object, it has some cold hard facts and true significance. So if you have a chance to view this fascinating star in the constellation of Canis Major be sure to check it out.