In 1963, a special cat named Felicette helped move man’s mission to outer space forward. Read on to learn more about Felicette and her contribution to space travel.

We are well aware that in the early days of rocket testing, dogs and monkeys were used in place of men. These animals played an important role as substitute astronauts. Incidentally, cats also played an important role as well. Most people would not think that a cat would make a good astronaut. Anyone who has taken a cat on a car ride can vouch for their stress-induced yowls and growls. In the 1960s, the French contributed to the desire of humans to reach space by using cats. One cat, named Felicette, won favor among scientists for her contribution and was recently memorialized as a bronze statue. 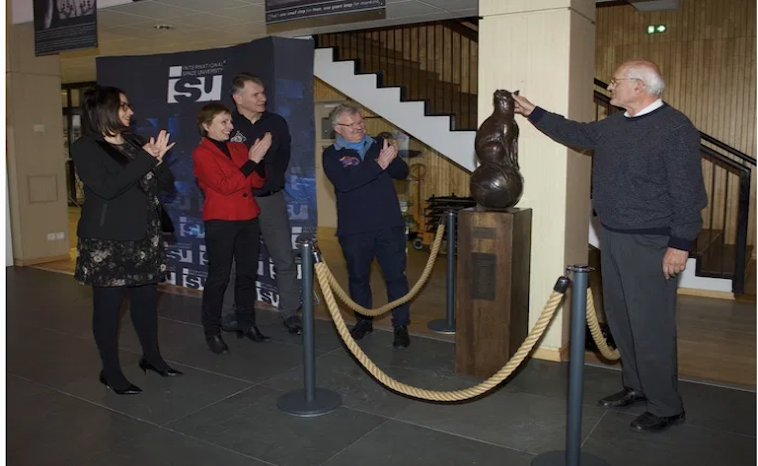 On October 18, 1963, a French cat named Felicette launched into space onboard a Véronique AGI 47 research rocket. She outperformed 13 other feline finalists with her acts of bravery and a healthy body. Each cat in the program trained for two months prior to the launch. In addition, all of the cats had permanent electrodes surgically implanted into their brains to assess neurological activity. Part of the program had the cats receive the same training as a human. For example, they sat in the high-G centrifuge three-axis chair that had a simulated rocket noise. Furthermore, their cat-specific training included confinement in their container and experience withstanding the restraint cloth.

Scientists chose Felicette because of her calm demeanor, healthy weight, and overall endurance. They attached electrodes to her forward left and right rear leg to monitor cardiac activity. As stated previously, nine electrodes were implanted on her skull. These electrodes were vital in allowing scientists to monitor brain wave activity during the flight. Two microphones, one on her chest and one on the nose cone of the rocket, monitored her breathing. Once launched, and upon reaching Low Earth Orbit, Felicette remained weightless for five minutes. The nose cone she traveled in, fell back to Earth. Thirteen minutes after the launch, Felicette was retrieved by helicopter and safely returned to the scientists.

After her landing, French scientists at the Education Center of Aviation and Medical Research (CERMA) studied Félicette’s brain waves. They wanted to see if she had changed at all since her voyage. Scientists could not find any ill effects from the flight. However, Félicette was euthanized two months after the launch. Her death allowed scientists the opportunity to examine her brain carefully.

In 2018, Matthew Serge Guy, a creative director and space cat fan in London, came up with the idea of a statue for Felicette. He raised over $57,000 for the project. As of 2020, a bronze statue of the space cat now stands at the International Space University (ISU) in Strasbourg, France. Located inside the Pioneer’s Hall at ISU, the 5-foot-tall (1.5 meters) bronze statue features Félicette perched on top of planet Earth and gazing up at the stars.

What happened to the French space program? While France does have its own formidable space program, Pearlman said the French ultimately did not pursue sending humans into space on their nation’s rockets.

We are happy that Felicette has her statue to commemorate her great achievement.