Did you know that animals have traveled to space? What animal went into orbit first? Why did scientists use animals? Read on to find out more about animals in space.

Animals helped make important discoveries concerning space throughout history. For some strange reason humans found it interesting to launch animals into the atmosphere. In 1783, outside the Palace of Versailles, Louis XVI, Marie Antoinette, and their friends witnessed the first ever hot air balloon flight. The first passengers? A rooster, a duck, and a sheep. Fortunately, the balloon floated for 2 miles and landed safely.

Once scientists began to focus on leaving Earth and entering space, animal test pilots became the most reasonable option.

It wasn’t until 1959 that a Rhesus Monkey named Able, and a squirrel monkey named Baker, successfully flew into space for biomedical research purposes and returned home alive. Launched from Cape Canaveral, they reached a maximum altitude of 300 miles, and travelled downrange 2,000 miles at speeds reaching 10,000 mph, before reentering the Earth’s atmosphere and being recovered by Navy ships.

What Animal Went Into Space First?

In 1960 two Russian dogs names Belka and Strelka became the first to successfully launch into space on Sputnik 5 and return to Earth safely. Also along for the ride were 40 mice, 2 rats, a rabbit, several fruit flies, and some plants. This success gave the Soviets the confidence necessary to send humans into orbit less than a year after the dogs safe return. 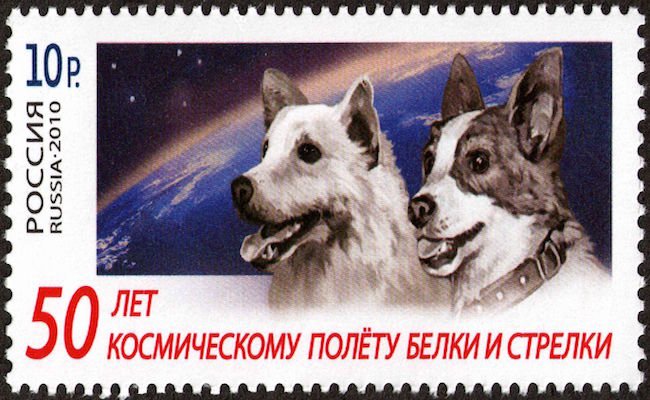 In 1966 another pair of Soviet dogs named Veterok and Ugolyok orbited the Earth for 22 days before successful return to Earth.

Not to be left out of the fun, two Russian Tortoises circled the moon on Soviet spacecraft Zond 5 in 1968. They lost 10% of their body weight when they returned.

Can Spiders Spin a Web in Space?

1973 saw the first flight of two European Garden spiders named Arabella and Anita. They spun webs on board the NASA space station SKYLAB for 59 days.

“Anita and Arabella got their mission because a high-school student named Judy Miles wondered if spiders could spin webs in a weightless environment.”

She suggested sending spiders into space to find out. NASA space scientists liked her proposal and went to work designing special cages, lights, and cameras. On her first day in orbit, Arabella didn’t do well. She spun sloppy webs and obviously felt the effects of weightlessness. However, by her third day in space, she spun finer recognizable webs.  She proved that spiders can spin earthly webs in space. Their bodies remain at the Smithsonian for their vital role in increasing our knowledge of space.

Not to be outdone by their earlier predecessors, two orb-weaving spiders visited the ISS aboard NASA’s shuttle Endeavour in 2008. They too wove sloppy webs in their first few days, but later successfully concocted symmetrical webs.

Thanks to the sacrifice of dozens of animals and insects our knowledge of space has expanded. Their participation led to putting men into orbit, on the moon, and inventions that we use now in our daily lives. A salute goes out to all the animals. We could not have done it without you.