The ancient Mayan city of Chichen Itza is home to an amazing observatory. Read on to learn more about this observatory and why the Mayans looked at the stars.

Over 1,000 years ago, the Yucatan Peninsula in modern-day Mexico was home to the Mayan people. Their civilization stretched thousands of miles throughout central America. As with many ancient cultures, the Mayan astronomers watched the stars and planets. To see these objects, the Mayans built an observatory named El Caraco. They built it for two reasons. One, it allowed them to practice and make offerings to the gods they worshipped. Second, observing the sun, moon, and planets gave them knowledge for growing food.

The dense jungles surrounding their city did not allow easy observation of the night sky. Therefore, they built an observation deck above the jungle. The El Caracol helped the Mayans know when to till the ground and plant their seeds. They planned their buildings to align with the angles created as the sun crossed the sky on certain days of the yea. For example, they marked the zenith passage when the sun lay directly overhead. Furthermore, they marked the points on the horizon where the sun and the planets, especially Venus, rose and set as they moved over time.

For the Mayans, Venus allowed them to track what they needed because of its consistency. The knew that it appeared both in the morning and evening skies. While other cultures believed Venus to be two separate planets, the Mayans knew better.

Venus has a very distinct pattern as it rises and sets. By watching the horizon each morning, one would observe Venus appearing over the horizon at daybreak. Each day, Venus would rise a little earlier, climbs a little higher, and shines a little brighter. Eventually, the rising sun drowns out its light.  Then the pattern reverses, and Venus rises a little later each day until finally, it fails to rise.

This rise and fall of Venus as a morning star takes 263 days. For the next 50 days, Venus disappears and cannot be seen in the sky at all.

Then, Venus reappears in the evening sky, where it remains for another 263-day phase before disappearing below the horizon for eight days. At the end of these eight days, Venus reappears as a morning star, and the cycle begins again. 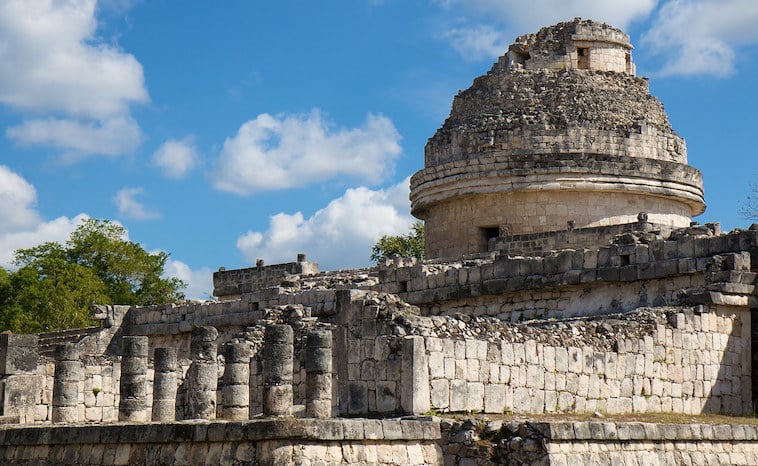 As mentioned, the Mayans built the observatory in line with the sun and planets. The tower atop El Caracol sits high on a four-cornered but not quite square platform and gives excellent unobstructed views of the skies and surrounding landscape.

The grand staircase that marks the front of El Caracol faces 27.5 degrees north of west. Without coincidence, this also lines up with Venus’s most northern position in the sky. If one were to measure the northeast and southwest corners of the building, they would find another fact. These corners, when looked upon diagonally, line up with the summer solstice sunrise and winter solstice sunset.

Inside the tower is a spiral staircase. It is this staircase that gives El Caracol its name, the snail. To gain access to the uppermost tower, you have to walk through a narrow winding staircase.

In the half-ruined tower lie three small openings. Archaeologists suggest that these openings allowed observation of the stars. If one lived 1,000 years ago, he or she would look up Venus rising at its northern and southern extremes.

The Mayans have earned credit for their keen observation and accurate calendar system dating back 1,000 years. Today, the El Caraco observatory lay as a tourist attraction at Chichen Itza on the Yucatan Peninsula. A weather-worn, yet inspiring structure, the observatory once helped the Mayan people live their lives long ago.