When scientists measure the distance and size of things in space it is seemingly impossible for our minds to grasp these concepts. Read on to see how we put these large numbers into more brain-friendly sizes.

Our brains can understand small distance and travel concepts like 5,280 feet in a mile. Why? Because one foot is 12″ and 5,280 feet is equal to one mile. That is a pretty simple concept for our brains to process. However, our brain struggles with the idea of something harder to understand, like the distance of something measured in light-years. This article seeks to put space numbers in more manageable sizes.

For example, the star Proxima Centauri. It is 4.2 light-years away. That means that when traveling at the speed of light, it would take 4.2 years to reach the star. How fast is the speed of light? The speed of light is over a billion kilometers an hour. Now that is a harder concept for our brains to process. To put that into terms, our mind can understand, we will look at distance and speed with smaller numbers. The International Space Station orbits the Earth at 27,000 KM/Hour.  If you were going that quickly straight up from the surface of Earth, how long would it take to reach Proxima Centauri?

It would take 13 seconds to leave Earth’s atmosphere and 13 hours later to pass the moon.  You would pass the sun 226 days later and pass the planet/non-planet Pluto 31 years later. Going as fast as the International Space Station, it would take 164,000 years to reach Proxima Centauri.

You would have to line up 30 million Suns to span the gap between the Sun and Proxima Centauri. 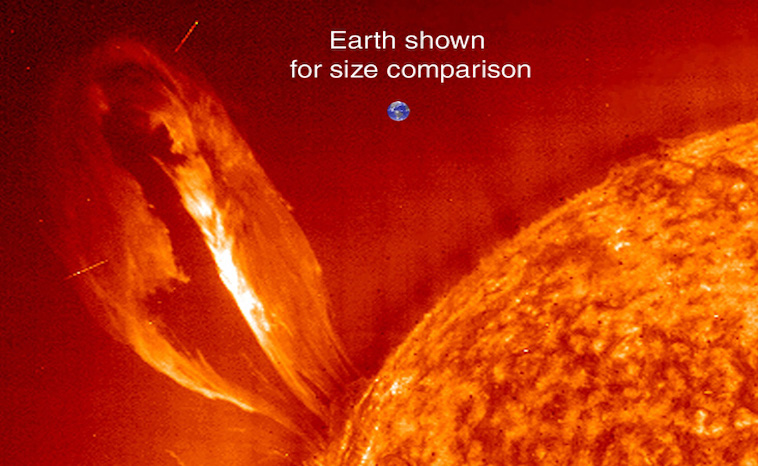 A non-stop flight from Dubai to San Francisco covers a distance of about 8,000 miles. This is roughly equal to the diameter of the Earth. However, our Sun is much bigger; its diameter is just over 100 times Earth’s. And the distance between the Earth and the Sun is about 100 times larger than that, close to 100 million miles.

Does the distance and size of space numbers seem more manageable? It is still hard to comprehend many concepts. However, we do know this. Space is huge !!