In the fall of 2020, NASA’s Jet Propulsion Laboratory in Southern California took out a new rover for a field test. Read on to learn more about what the rover can do and how NASA plans to use it in future space exploration.

Imagine walking a path and coming to the edge of a slope. You hear rushing water and decide to look over the edge. Below you see a beautiful river with clear water rushing over large rocks. Animals like deer and squirrels forage among tall grasses and small shrubs near the river’s edge. How would you love to visit the river below? Yet, you cannot because the slope is too dangerous to descend. This type of scenario is why NASA has spent the last several years building a new rover called DuAxle. Their plans do not involve river beds here on Earth but potential river beds on other planets and moons.

The DuAxle rover derives its name from the fact that it can split apart into two separate machines. The front axle can detach from the base travel about independently from the base. A tether keeps the axle connected to the base and prevents it from being lost as it explores. NASA’s test of the new rover took place in the Mojave Desert in the fall of 2020. During the test, DuAxle showed off its ability to dock, disengage its fronts axle, and descend over the edge of a steep slope.

“DuAxel performed extremely well in the field, successfully demonstrating its ability to approach a challenging terrain, anchor, and then undock its tethered Axel rover. Axel then autonomously maneuvered down steep and rocky slopes, deploying its instruments without the necessity of a robotic arm,” says Issa Nesnas, a robotics technologist at JPL.

The concept of this type of rover has been in development since the 1990s. NASA says that they always wanted a modular type of rover with several independent parts that could come together and work as one. In 2006, NASA discovered gullies along crater walls on Mars. A gully is a ravine or gorge made by water. NASA wanted to explore these gullies, but their rovers do not have the ability to travel along the sides of deep ravines. The DuAxle design allows them to explore these areas in the search for water.

The front axle has several instruments on board to collect information. An infrared spectrometer can determine if dark streaks in the terrain were caused by water. A camera onboard provides mapping and navigation. The tether provides support, power, and communication for the front axle as it explores. Once the front axle has finished its exploration, the main docked unit reels it back into place. 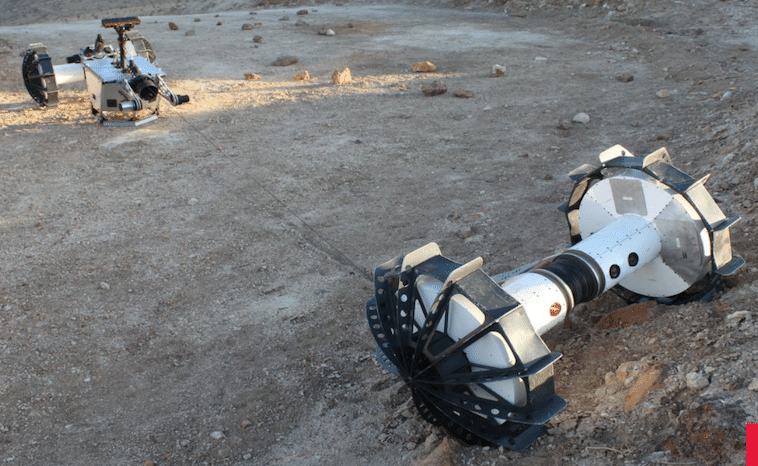 Part of DuAxle’s design allows the rover to traverse rough terrains. NASA knew they needed flexibility in the movement as the rover encounters crater walls, pits, scarps, vents, and other extreme terrains. Earth offers a wide variety of terrains for them to test the rover. Areas such as rocky outcrops and cliff faces can help engineers determine if modifications are needed for the rover.

“DuAxel opens up access to more extreme terrain on planetary bodies such as the Moon, Mars, Mercury, and possibly some icy worlds, like Jupiter’s moon Europa,” says Issa Nesnas, a robotics technologist at JPL.

Currently, DuAxle has not been assigned a mission and continues to train for the day it comes into active service.