Do you live in a place that has lots of city lights? If you do, you probably have not seen everything that the night sky has to offer. Read on to learn more about Dark Sky environments.

Modern society boasts remarkable advances in cell phones, medicine, cars, planes and street lights. If you live in an area that has nighttime illumination you probably have not seen everything that the sky has to offer. Living near a big city, your sky may suffer from the effects of light pollution. What does that mean?

According to a study by Science Advances, we are losing our ability to see the night sky.

“An international team of researchers created the most detailed atlas yet of light pollution around the world. They estimate that the Milky Way is no longer visible to fully one-third of humanity — including 60 percent of Europeans and 80 percent of Americans. Artificial light from cities has created a permanent “skyglow” at night, obscuring our view of the stars.” (Science Advances, 2016)

How severe is light pollution? It is estimated that millions of children will never see the Milky Way Galaxy in its natural state, but will only see it on a computer screen. According to Todd Carlson at SkyNews the ability to see the night sky is getting worse.

“The fact is that much outdoor lighting used at night is inefficient, overly bright, poorly targeted, improperly shielded, and, in many cases, completely unnecessary. This light and the electricity used to create it randomly spills into the sky. Rather than focusing it on to the actual objects and areas that people want to be illuminated.” (Carlson, 2016)

Some cities have implemented methods to lessen their light pollution impact. For example, they install LED bulbs that illuminate a concentrated area. In addition, they have established motion sensing lights that stay off until movement turns them on. In order to show the effects of light pollution, Mr. Carlson shares with us a picture from a power outage. This power outage occurred in the Northeast portion of the United States in 2003. It reveals what the nighttime sky looks like without light pollution. 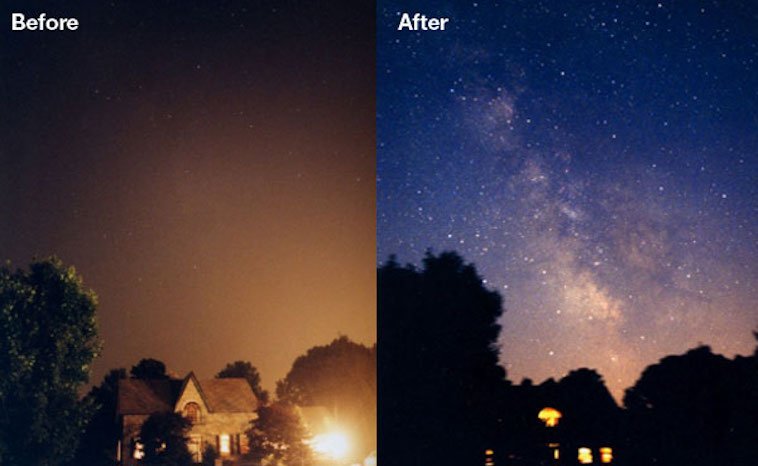 The photo shows how the night sky would look without light pollution. Consequently, astronomers build observatories far out away from civilization. Having a place to set up an observatory has proved difficult in the last several years. Concerned with this information a non-profit organization known as the International Dark Sky Association works to set up dark sky areas. They want to preserve and protect the night sky and inform people how they can help reduce light pollution.

How To Find Dark Sky Areas

If you live in an area affected by light pollution and desire to see the night sky, there are several resources to help. The International Dark-Sky Association offers an interactive map locating dark sky areas in several countries. If you have access to a smartphone, an app named Dark Sky Finder will help you find areas for looking at the nighttime sky. In addition, here are some things you can do to help reduce light pollution.

By working together, we all can enjoy seeing the night sky. For thousands of years, people have found inspiration in the stars and we can all benefit from viewing the amazing sky above us.