How do scientists perform experiments in weightlessness here on Earth? Read on to learn more about the Bremen Drop Tower.

Scientists that work on experiments for space have a problem here on Earth. The Earth has gravity. So how do they conduct their experiments in a weightless environment? In Bremen, Germany a 479-foot tower allows scientists from all over the world to conduct their science experiments.

The tower was built between 1988 and 1990 to help scientists in fields like astrophysics, biology, chemistry, combustion, fluid dynamics, fundamental physics, and material sciences.  Along with those fields, they also test equipment for space missions.

In order to test weightlessness, they drop capsules from the top. The specially designed capsule is not only shockproof but can withstand acceleration and deceleration forces. Furthermore, they can pressurize the capsule to normal atmospheric pressure and temperature. Scientists can choose from three capsule types, short, long and catapult. 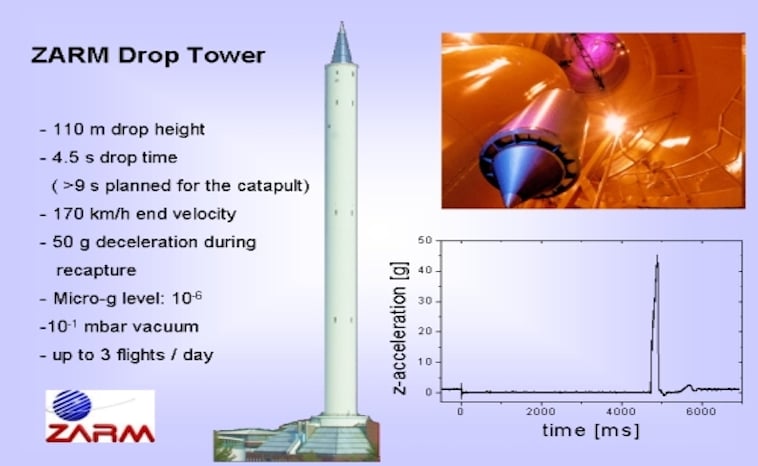 How Does It Work?

The objects falling automatically achieve near weightlessness. In addition, the experiments inside the capsule also achieve weightlessness. The container that holds everything is 2.5 meters long and 80 centimeters wide.

The simplest form of the drop experiments pulls the capsule to a height of 120 meters. This reaches the top of the tube and then released.  After 4.74 seconds the experiment lands safely in the deceleration unit filled with polystyrene pellets. The capsule experiences a deceleration of up to 50 g after the experiment completion. How do they get the tube free from air pressure? 18 high-performance pumps make sure that the drop tube contains only one ten thousandths of the normal air pressure. Consequently, a vacuum happens inside the tube creating low air drag. The Bremen Tower provides one of the best environments of microgravity.

Since 2007, the Bremen facility has also offered a catapult mode. The catapult launches the capsule vertically to the top of the tower. At this point, the capsule then drops back down. Using this mode, the microgravity experiment time extends from 4.74 to 9.3 s. The capsule and its enclosed experiment experience an upward acceleration of up to 35 g before the experiment begins.

“When breaking ground for the Bremen Drop Tower on May 3, 1988, the installation of a catapult system underneath the building had already been taken into account. 16 years later, the ZARM engineers finished designing the catapult system. It went to work in December 2004. The pneumatically driven system takes 0.25 seconds to accelerate the experiment capsule to a speed of 168 kilometers per hour. The exact force of acceleration is being calculated for each individual experiment in order to throw the drop capsule as close as possible to the top of the drop tube and thus maximize the duration of the flight. After a couple of seconds, the deceleration unit moves into place again to catch the capsule on its way down.” (Bremen, 2018)

By doubling the trajectory length they extended the time period spent in microgravity to 9.3 seconds. No other drop facility in the world can provide the same results. Have a hypothesis that requires a weightless environment? Contact Bremen University to submit your request to use the tower.