Several companies have plans to take people on a tour of outer space in the next couple of years. Read on to learn more about Blue Origin.

Would you like to travel to space as a tourist? If you do, you are among thousands of people already signed up to tour space. However, plan to spend quite a bit of money on this exciting adventure. Let’s look at Blue Origin and see what they have to offer.

Do you have an extra $100,000 burning a hole in your pocket? Then consider Blue Origin from Amazon founder Jeff Bezos. His company has been in the business of building rockets since 2000. They started with rocket propulsion systems and launch vehicles. In 2016, Bezos announced his plans for space tourism. The New Shepard reusable suborbital rocket system will propel you above the Karman Line.

The Kármán line is the altitude where space begins, about 62 miles (100 km) above the Earth. It commonly represents the border between the Earth’s atmosphere and outer space.

Your experience begins by getting into a 530-cubic area inside the capsule. You will first notice the large viewing area. The six windows comprise more than one-third of the capsules surface structure.

“Each window is made of multiple layers of fracture-tough transparencies, designed to provide crystal clarity of the incredible views before you. Minimizing distortion and reflection, the windows transmit 92% of visible light – as good as glass.” (Blue Origin, 2018)

Engineers designed the seats, so they recline and promote safety. Upon re-entry, researchers have found that a person laying down can withstand the decelerative g-forces. In addition, the seats will absorb the shock of landing. After the capsule detaches from the rocket, you can unbuckle and experience weightlessness. 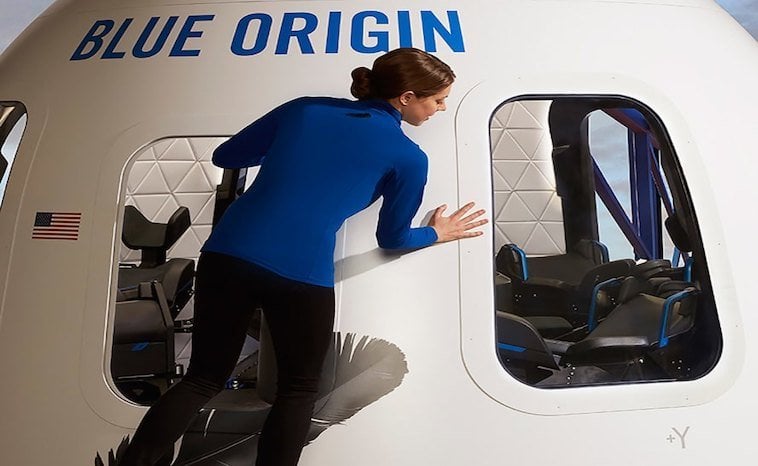 Safely Landing Back on Earth

After the capsule enters the Karman Line, it will start a descent back into Earth’s atmosphere. What happens to a capsule upon re-entry? When engineers design a space capsule they have to keep in mind some important things.

If the capsule slows down too quickly, everything in the capsule will be crushed. If it doesn’t slow down fast enough, it will crash into the surface and be destroyed.

What do you think? A good way to spend $100,000? If you have an adventurous spirit and the funds this flight may be for you.