The Blue Origin National team has delivered a full scale mock-up of the manned lunar lander it has built for NASA. Read on to learn more about this new lander.

The Blue Origin National Team, which includes Lockheed Martin, Northrop Grumman, and Draper, has delivered its Blue Lunar Lander to NASA for review. NASA plans to land at the South Pole of the Moon in 2024. Jeff Bezos owns Blue Origin.

The goal of the lunar lander is to deliver supplies, including humans, to the lunar surface as part of NASA’s Artemis program. Three companies are developing a landing system with three separate pieces. Each company involved brings a specific craft needed for the project to work. These pieces include:

Lockheed Martin will provide the Orion capsule. This capsule is a sealed capsule for astronauts to live in a while exploring environments not capable of supporting life. Furthermore, its considerable volume easily accommodates four astronauts. In addition, its seats and displays can fit a variety of sizes of both male and female crew. (Lockheed Martin, 2020)

The Orion capsule can attach to the Blue Origin Lander and bring it from space to the Moon. At this point, the Blue Lander separates from Orion and lands itself on the Moon. Northrop Grumman is building the long cylinder that connects up with the lander. Furthermore, it provides the propulsion through low lunar orbit as it readies to land, and then disconnects before the actual descent. The Draper company offers all the avionics technologies needed to move through space. 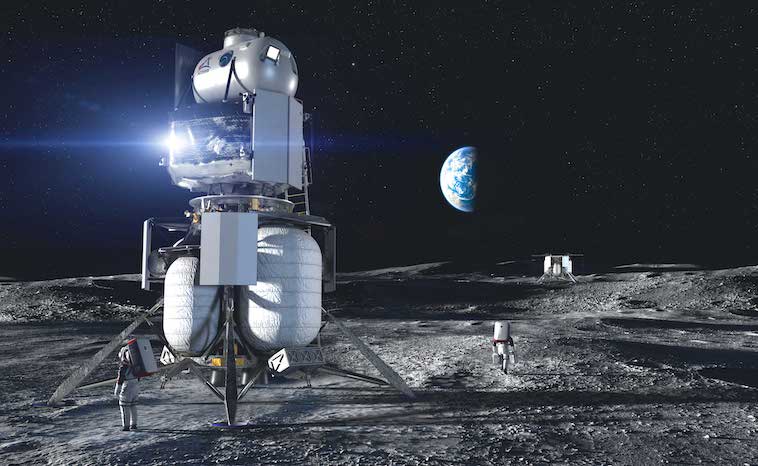 The National Team gave NASA some hardware to review on August 20th. That hardware included a full-scale engineering mock-up of its lunar lander. The mock-up lander stands more than 40 feet tall and consists of the ascent and descent components.

“Testing this engineering mock-up for crew interaction is a step toward making this historic mission real. Benefitting from NASA’s’s expertise and feedback at this early stage allows us to develop a safe commercial system that meets the agency’s needs,” said Brent Sherwood, Blue Origin’s vice president of advanced development programs.

Sending humans into space always runs a risk of imminent danger. Lockheed Martin takes the safety of a manned crew seriously. Therefore, they have designed the Orion spacecraft to protect humans.

Orion has the following capabilities:

NASA has other companies also working on a lander system for the Artemis Mission. Dynetics and Space X also have landers in development. NASA will decide in the coming years which elements of each program they like the best and utilize them. Once decisions are made, the Artemis program can then set mission goals and eventually launch to the Moon.