Ready to see the longest lunar eclipse of this century? Read on to learn more about what makes this lunar eclipse so very special.

The longest total lunar eclipse of the 21st century will occur on Friday, July 27th. Alone that makes this event spectacular. What makes it even more interesting? Fiery Mars will add to the spectacle as it appears directly below the blood moon at close to its maximum brightness.

Our ancient ancestors trembled at the sight of a red moon rising. Their limited understanding caused panic and terror. They believed that the world was coming to an end. However, we know why the moon will appear red. Why does it appear red instead of black? During the eclipse, the moon will pass through the umbra – the darkest part of the Earth’s shadow – and take on a red glow. As a consequence, instead of turning black as you might expect, the atmosphere of the Earth bends the light of the sun onto the moon. Earth’s air scatters more shorter-wavelength light in colors such as green or blue. What’s left is the longer-wavelength, redder end of the spectrum. This causes it to turn a deep red color, hence giving this event a somewhat ominous moniker. We refer to this as a blood moon. 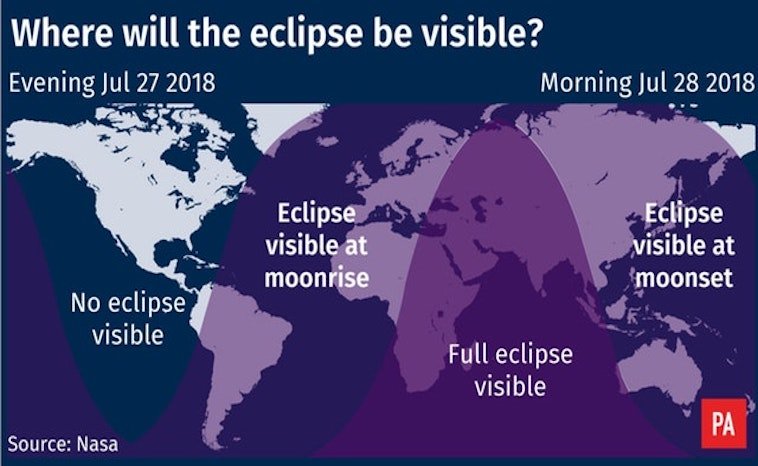 The total phase of the eclipse will last 1 hour and 43 minutes. During which Earth’s moon will turn a spectacular red or ruddy-brown color. From start to finish, the entire celestial event will last nearly 4 hours.

The eclipse won’t be visible to viewers in North America, except via webcasts. “Observers in much of Africa, the Middle East, southern Asia and the Indian Ocean region will get quite a show given cooperative weather”, according to lunar scientist Noah Petro, of NASA’s Goddard Space Flight Center in Greenbelt, Maryland.

Although it is expected to last 103 minutes, those in the UK and Ireland will not be able to see the start of the lunar eclipse as the moon will still be below the horizon.

Mars will add to the spectacle shining brightly below the blood moon as it reaches perihelic opposition. Perihelic opposition means that the Red Planet and the sun are on directly opposite sides of Earth. It will appear as a bright reddish star. This month, Mars will be at its closest to Earth since 2003.

Others Objects in the Sky

Mars will have company when it appears orange in the night sky on July 27th. Look to the sky from west to east and you have the potential to see the International Space Station. It will appear like a bright star, before fading from sight a few minutes later. You can also utilize an app called Skyview to track the ISS and other planets during this event.

In addition, Mercury, Venus, Jupiter, and Saturn will also make an appearance that night.

To look at the chart by NASA for the total lunar eclipse click here. Hopefully, you live in part of the world that will see this amazing event.