Many people are talking about UFOs these days after recent United States Pentagon reports. However, these reports do not address the black, triangle-shaped UFOs that people have reported seeing. Read on to discover what we know about these mysterious UFOs.

Most people report seeing UFOs in the shape of saucers. However, some say black triangle-shaped UFOs. Often UFOs sightings are later identified as weather balloons, military planes, or lanterns. “Among the most commonly reported shapes are V-shaped, arrowhead-like, or triangular,” says UFO researcher David Marler. He is the author of Triangular UFOs: An Estimate of the Situation. In his book, he states that he has reviewed more than 17,000 case files involving unidentified triangular craft, sometimes called “black triangles”.

These black triangles do not fall under the same size scale as regular saucer type UFOs. Instead, reports say they are huge, as wide as football fields, and yet eerily quiet.

During the 1960s, mysterious flying triangles were reported over Connecticut, Georgia, Pennsylvania, and Texas. In addition, reports of black triangle UFOs came from London, Madrid, and Czechoslovakia. In 1969, two National Guard pilots tailed “a “triangular-shaped object, 50 feet in diameter” for 20 minutes over San Juan, Puerto Rico. Unfortunately, they ran low on fuel and had to return to their base.

On a clear November night in 1989, near the town of Eupen, Belgium, two police officers saw something strange. Heinrich Nicoll and Hubert Von Montigny called their dispatcher to report an object while on a routine patrol. “Suddenly, they told me they saw a strange object in the s “y,” said dispatcher Albert Creutz.

By the time the evening was over, at least 30 different groups and three separate pairs of police officers reported seeing the unidentified flying object. However, reports described “a triangular object with a bright red center light” or “a flying platform” with three huge searchlights lasted for a month. 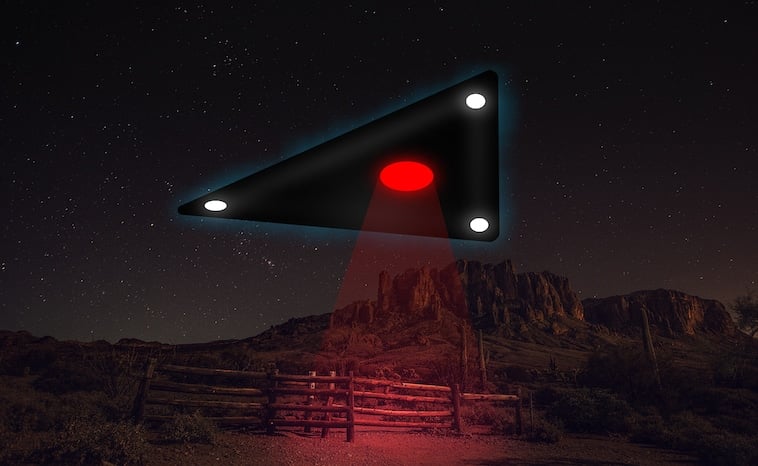 In March 1990, the Belgian Air Force sent up two F-16 fighter jets to get a closer look at one triangle that had been spotted on radar. Their onboard computers recorded the object’s remarkable maneuverability. In addition, it recorded acceleration from 1,000 kilometers per hour (about 621 miles per hour) to 1,800 kilometers per hour (about 1,120 miles per hour) within a second”. “What the computers registered exceeded the limits of conventional aviation,” a Belgian air force colonel told reporters.

Reports from the time show that 2,000 sightings took place in the country between November 1989 and April 1990. Were people seeing the brand new United States Air Force’s Stealth bomber? The description of a large black triangle certainly fits. It can reach a top speed of 1,000 kilometers per hour (628 miles per hour). However, it does account for the maneuverability reported by the Belgium Air Force.

In 2004, police officers near Tinley Park, Illinois, were called to investigate a strange incident. A  truck driver reported a massive arrowhead-shaped craft hovering low in the sky. He claimed it was two stories high and as long as a football field. Dispatch tapes reveal the shock and awe expressed by the different law-enforcement teams, who were all in radio contact with each other.

Several weeks later, the USS Nimitz was conducting drills ahead of Persian Gulf deployment off the coast of San Diego, California. An F/A-18 Super Hornet pilot recorded “a “tic-“ac” object roughly the size of an airplane. Known as the Nimitz incident and one of three, the Navy confirmed as an unidentified aerial phenomenon.