You may or may not already know the fact that there is tons of debris and junk floating around in space. This can be as small as nuts and bolts or as big as a chunk of a satellite. But did you know, sometimes that space junk actually makes it back to Earth? This happened not too long ago. Check it out!

You may remember us talking about space junk in a past post; Junk Junk Everywhere, Even in Space (if you missed it you can read it here). Debris in space can pose problems to space crafts, satellite systems and even astronauts.  But what happens on the rare occasion when a piece of that junk actually lands on Earth? Well, the situation can be dangerous, but luckily when a huge cylindrical-shaped piece of junk fell from above no one was injured. 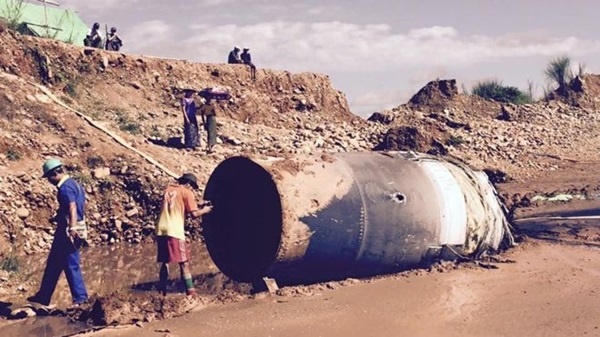 On November 10th when the residents of Northern Myanmar and particularly the workers of a jade mine heard a loud boom, then saw a streak of brilliant light zoom across the sky, they new something wasn’t right.

To their astonishment a large 15 foot (4.5 meter) long and 4 foot (1.2 meter) wide, tube-shaped object shook the nearby houses and actually tore the roof off of one. It then hit the ground and bounced 150 feet (50 meters) sliding to a stop in a muddy region of the mine.

People of the area reported seeing smoke and those close to the space junk could smell a strong acrid odor coming from the debris.

It turns out the mysterious heap of metal was actually a Chinese Long March 11 rocket which had lifted off from the Jiuquan Satellite Launch Centre the night before, carrying an experimental satellite.

The piece that broke away and landed on Earth is thought to be a part of the Chinese satellite or the rocket itself. However, the good news is nobody was hurt by the crash and folks have a great story to tell their friends.