Avalanches can occur when a snow load is so great that it can no longer hang onto the side of a mountain. Can avalanches happen on Mars? Read on to learn more about avalanches in space.

Alaska is home to pristine wilderness, snow-covered mountains, and avalanches in winter. Lots of snow falls each year during an Alaskan winter. As anyone who lives in Alaska can tell you, avalanches cause big problems. Not only can they take the lives of snowboarders and skiers, but they can also impede traffic flow around the state. On Mars, avalanches occur during the spring season. It’s not the abundance of snow that causes these avalanches. Instead, it is a change in the season.

Here on Earth, several factors affect the likelihood of an avalanche. These factors include weather, temperature, slope steepness, and slope orientation (whether the slope is facing north or south). In addition, wind direction, terrain, vegetation, and general snowpack conditions also become factors. Different combinations of these factors can create low, moderate, or extreme avalanche conditions.

Avalanche danger is greatest just after a new storm has dropped a fresh load of snow, or high winds have overloaded slopes. Anything steeper than 25 degrees can avalanche, but most avalanches occur on slopes between 30 and 45 degrees. People that snowboard, snow ski, or snowmobile need to be wary of steep, smooth, leeward slopes.  (dnr.Alaska.gov) 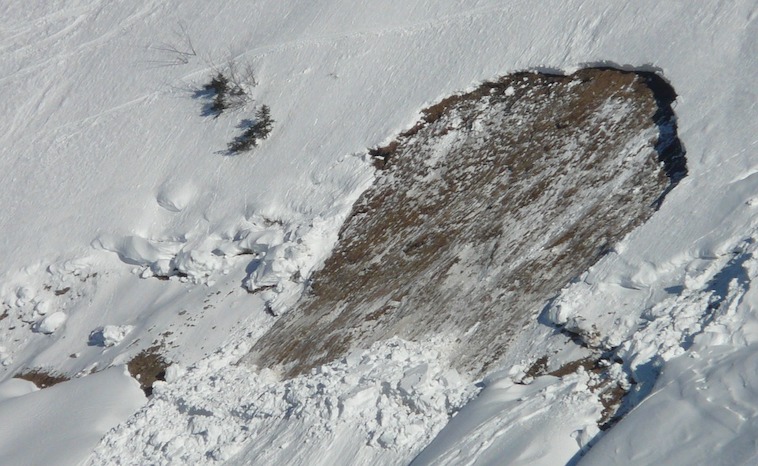 According to NASA, avalanches happen on Mars during the springtime. NASA’s Mars Reconnaissance Orbiter has captured an incredible image of an avalanche on the Red Planet. The orbiter captured the photo of the avalanche through its onboard High-Resolution Imaging Science Experiment (HiRISE) camera.  NASA experts say that the avalanches occur in the spring when warm sunlight melts ice layers high in the mountains. As the ice layers melt, they crumble. In the image, a cloud of reddish dust can be seen on the side of a mountain on Mars.

“Every spring the Sun shines on the side of the stack of layers at the north pole of Mars known as the north polar layered deposits,” wrote Candy Hansen of the University of Arizona’s Lunar & Planetary Laboratory. 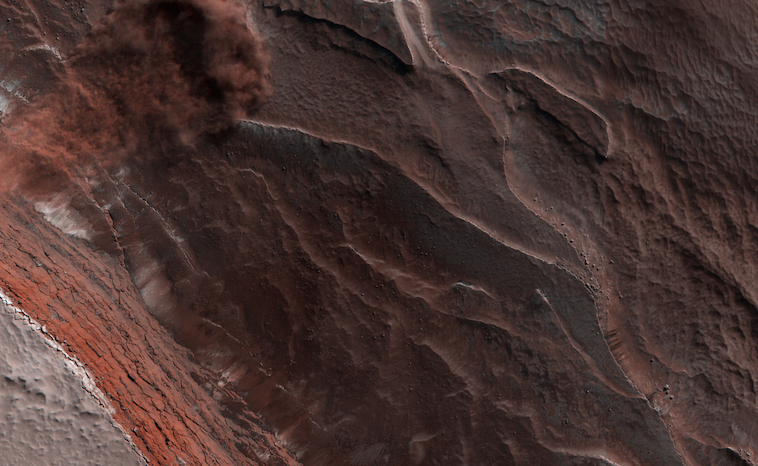 The north polar layered deposits are layers of dusty ice up to 2 miles thick and approximately 620 miles in diameter.

According to Hansen, the loosened layers of debris reach the bottom of the cliff. Once it reaches the bottom, it sends up a large cloud of dust and large particles. Layers at the bottom of the mountain are composed of different materials with varying textures and colors. The clouds that billow up are filled with these materials.

Avalanches not only occur during the warm season but also at other times. In addition, some things that happen on the surface may also cause avalanches. In June 2018, NASA’s orbiter was able to spot an avalanche that was caused by a meteoroid impact on Mars.

According to NASA, a five-meter long rock hit the Martian surface and left a small crater. Since the meteorite crashed on a slope, it destabilized it and caused an avalanche of dirt and dust. The latest Mars probes continually test for Marsquakes. Scientists speculate that tremors below the surface also have the potential to set off avalanches as well.