Why did the Earth experience Ice Ages in the past? What factors cause these periods of ice? Read on to learn more about Earth’s Ice Ages.

The seasons are produced by the annual motion of Earth around the sun, but subtle changes in the motion can have dramatic affects on climate. Scientists study to find out what factors cause ice ages.  We may not see huge changes in our lifetime, but over thousands of years, continents can become covered by glaciers.

Earth has gone through ice ages when the worldwide climate was cooler and dryer and thick layers of ice covered polar regions and extended partway to the equator. Between ice ages, Earth remains warmer and ice sheets do not exist even at the poles. Scientists have found evidence of at least four ice ages in Earth’s past. One occurred 2.5 billion years ago.  The other three that have been identified have all occurred in the last billion years. Others may have existed, but evidence of early ice ages usually become erased by more recent ice sheets. The lengths of ice ages range from a few tens of millions of years to a few hundred million years. 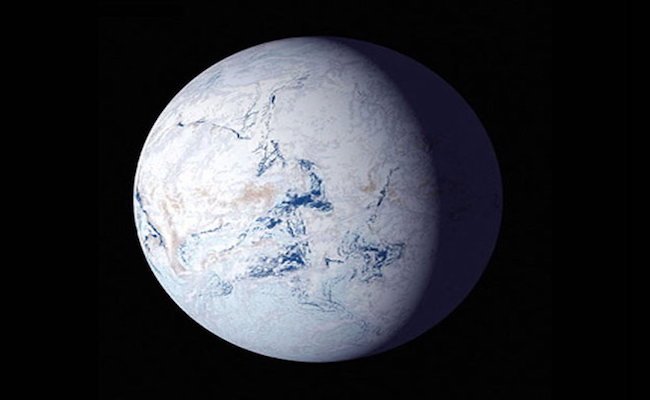 What causes ice ages to occur? In 1920 A Yugoslavian meteorologist Milutin Milankovitch proposed that small changes in Earth’s orbit, precession, and inclination affect Earth’s climate and could cause ice ages. Those three factors when working against each other produce complex periodic variations in Earth’s climate.

Earth’s elliptical orbit has varied slightly over the last 100,000 years. At present, Earth’s orbit carries it 1.7 percent closer than average to the sun during Northern Hemisphere winters. This makes northern summers slightly cooler. When Earth’s orbit becomes more elliptical, northern summers might be too cool to melt all the snow and ice from previous winters. Therefore glaciers would have a chance to grow.

Precession causes Earth’s axis to sweep around a cone over a period of about 26,000 years. That gradually changes the points in Earth’s orbit where a given hemisphere experiences the seasons. Northern Hemisphere summers now occur when Earth is 1.7 percent farther from the sun. Consequently, in 13,000 years northern summers will occur on the other side of Earth’s orbit where it will be 1.7 percent closer to the sun. Therefore, the hotter summers may melt all the previous winter’s snow preventing the growth of glaciers.

The inclination of Earth’s equator to its orbit varies from 22° to 24° over a period of roughly 41,000 years. When the inclination is greater, seasons are more severe. Do ice ages occur from a combination of these things? In order to prove Milankovitch’s theory scientists drilled deep in the ocean to collect long cores of sediment.

When they scientists constructed a history of ocean temperatures that matched the predictions of Milankovitch’s theory they believed that his theory had been proven. An ice age may have resulted from the three factors he theorized. Years later contradictory evidence occurred when calcite deposits found in a deep crack in Nevada showed that the Earth had begun warming up thousands of years too early for the last ice age related to the Milankovitch’s cycles. Then in 1997 a new study emerged that indeed the ocean core samples were correct as well as the Nevada samples. They believe that the Nevada calcite deposits recorded regional climate impacts and the ocean recorded global climate changes.

In conclusion, scientists test Milankovitch’s theory every time they take samples. The ongoing advancement in science will not allow them to test old theories, but may help them to make new theories as to what causes ice ages here on Earth.