Could aliens already be using light sail technology to visit our world? Read on to learn more about a new theory around the comet Oumuamua.

The internet is abuzz due to the news that the giant comet Oumuamua may be an alien spacecraft. What has prompted this excitement? Did aliens send a probe into our area of space? Or is it much ado about nothing related to aliens? Researchers from the Harvard Smithsonian Center for Astrophysics have recently published a paper speculating that the giant comet Oumuamua may indeed be an alien solar sail.

Scientists have seen this technology before when looking at moving objects through space using light from the sun. Solar sails or nano spaceships were first conceived by Johannes Kepler in 1610. Currently, researchers are working to get these nano ships ready to venture deep toward Alpha Centauri. However, a new study suggests that aliens mays have already completed their research and flown into our area.

‘Oumuamua (pronounced oh MOO-uh MOO-uh), which is Hawaiian for “a messenger from afar arriving first.”

“One possibility is that ‘Oumuamua is a light sail, floating in interstellar space as a debris from an advanced technological equipment”, the authors claim, and it might be unused debris that has been thrown out into space from a planetary system. Furthermore, this may account for its very unusual shape as nearly flat. 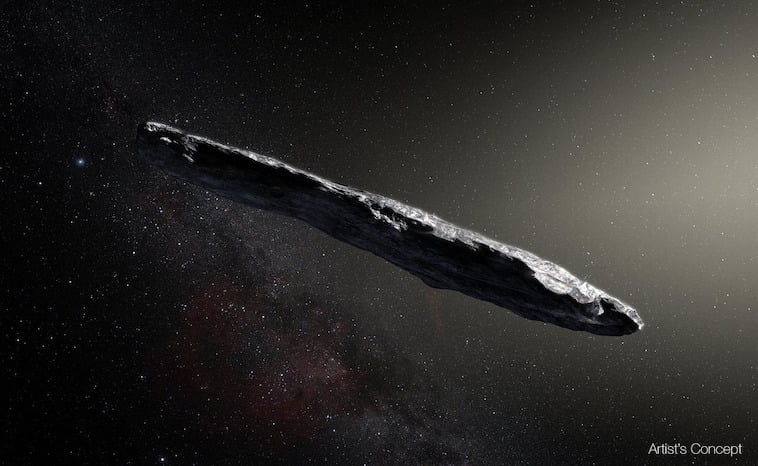 This artist’s impression shows the first interstellar asteroid: `Oumuamua. This unique object was discovered on 19 October 2017 by the Pan-STARRS 1 telescope in Hawai`i. Subsequent observations from ESO’s Very Large Telescope in Chile and other observatories around the world show that it was traveling through space for millions of years before its chance encounter with our star system.  (CREDIT: NASA)

NASA originally classified it as an asteroid. However, it did not show signs of asteroid activity after it went past the Sun in September 2017. Traveling at a speed of 196,000 miles per hour (87.3 kilometers per second) Oumuamua accelerated slightly and now NASA has it listed as a comet. The researchers added to the alien theory by writing, “The object might be “a fully operational probe sent intentionally to Earth vicinity by an alien civilization”.

Where Did It Come From?

Preliminary orbital calculations suggest that the object came from the approximate direction of the bright star Vega, in the northern constellation of Lyra. However, it took a long time to make the journey and Vega was not near that position when the ‘Oumuamua’ was there about 300,000 years ago. It will travel beyond Saturn’s orbit in January 2019; as it leaves our solar system, ‘Oumuamua will head for the constellation Pegasus.

Let’s assume that it is a regular comet passing through the solar system. According to NASA this object actually has some similarities to objects further out in space. Karen Meech of the Institute for Astronomy in Hawaii found that “Oumuamua varies in brightness by a factor of 10 as it spins on its axis every 7.3 hours. No known asteroid or comet from our solar system varies so widely in brightness, with such a large ratio between length and width. The most elongated objects we have seen to date are no more than three times longer than they are wide.”

The NASA research also concludes that ‘Oumuamua’ is dense, composed of rock and possibly metals. Furthermore, it has no water or ice. They believe its surface reddened due to the effects of irradiation from cosmic rays over hundreds of millions of years.