What did Japanese Flight 1628 encounter on the night of November 17, 1986? Read on to learn more about this mysterious event.

In May of 2020, the Japanese government put into place a UFO contingency plan. The government has not officially declared UFOs, but they want their security forces to be ready just in case. The case of Japanese Flight 1628 from November 1986 may have helped drive this decision. To this day, the people involved in the event have remained vigilant to their story and the events of that night. No one has stepped forward to provide evidence of a hoax.

Japanese Flight 1628 was en route from Paris, France, to Narita International Airport near Tokyo, Japan. The flight crew reported nothing of significance occurred until they were near Anchorage. At 17:11 hours, the crew noted specifically that they observed two strange objects coming up to the left side of their aircraft. They similarly approached the plane as a military escort.

Captain Terauchi believed they were some military aircraft and were identifying the flight. However, their actions did not appear normal.

“The thing was flying as if there was no such thing as gravity. It sped up, then stopped, then flew at our speed, in our direction, so that to us it [appeared to be] standing still. The next instant, it changed course. … In other words, the flying object had overcome gravity.” recalled the Captain.

Suddenly, the two objects came closer and illuminated the entire cabin. The crew reported an intense heat filled the cabin. 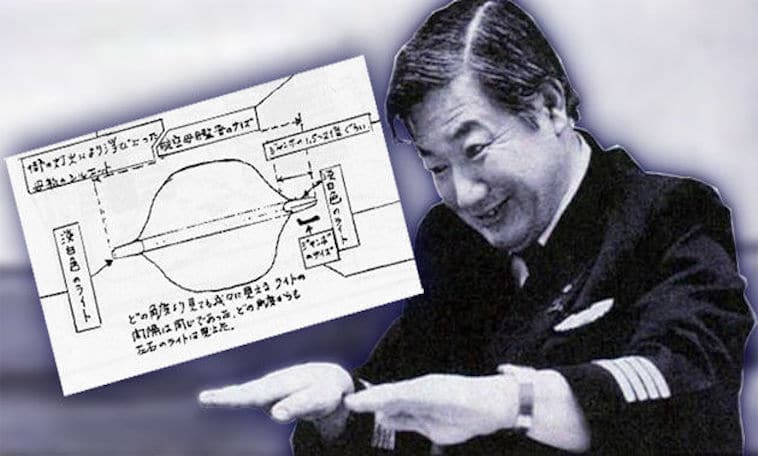 This alarming event prompted a call to Alaska air traffic control which could not identify any objects near the jet. However, Elmendorf’s NORAD Regional Operations Control Center (ROCC), directly in his flight path, reported a “surge primary return” after some minutes.

What did the crew see out their window? The first set of objects appeared as a square with glowing thrusters. In his drawing, Captain Terauchi points out that the objects would appear cylindrical if viewed from another angle. These two objects did not stay with the aircraft for long. They left, and in their place appeared a larger craft which appeared as a disc shape.

As Flight 1628 approached Fairbanks, the lights from the city illuminated the object. Captain Terauchi stated that the object was “twice the size of an aircraft carrier.” FAA flight control reports indicate the object stayed with JAL Flight 1628 for at least 32 minutes.

The FAA’s Alaskan Region consulted John Callahan, the FAA Division Chief of the Accidents and Investigations branch.  He was unaware of any such incident. However, he believed it was a stealth bomber that followed the aircraft. However,  he asked the Alaskan Region to forward the relevant data where he and his superior reviewed it. There was enough evidence of something not related to a stealth bomber that they took the information to officials in the United States government.

Callahan and his superior met with the FBI, CIA, and President Reagan’s Scientific Study Team. The officials considered the data to represent the first instance of recorded radar data on a UFO.  Upon completing the presentation, all present were told that the incident was secret and that their meeting “never took place.” However, Mr. Callahan retained the original video, the pilot’s report, and the FAA’s first report in his office.

Three months later, the FAA formally released their results at a press conference held on March 5, 1987.  The official conclusion stated that “the FAA did not have enough material to confirm that something was there,” and though they were “accepting the descriptions by the crew,” they were “unable to support what they saw.”

What did three experienced aircraft pilots and crew witness that night? Will this be revealed in the upcoming report due to come out this summer from the United States government? We will have to wait to see.