Japan’s security forces are formulating a plan to respond to potential UFO encounters. Read on to learn more about this plan.

Japan is working on a UFO contingency plan. Not that they have officially reported UFO encounters. Defense Minister Taro Kono doesn’t believe in UFOs. However, he wants the Self-Defense Forces to have a plan in place. This plan would address UFOs or other unknown aircraft just in case.

Kono commented at a news conference on April 28 after the U.S. Defense Department declassified and released videos shot by Navy pilots, pointing to the possibility that UFOs exist.

The declassified material includes footage from three separate events. The Pentagon formally released these unclassified videos on April 27, 2020. These films were taken by Navy pilots of “unidentified aerial phenomena.” The film shows fast-moving oblong objects racing through the sky.

One of the videos shows an incident from 2004 over the Pacific Ocean. The Navy pilots encountered an object over 40 feet long. Furthermore, it hovered about 50 feet over the water. One pilot reported, “it accelerated liked nothing I’ve ever seen.”

The two other videos were taken off the coast of Florida in 2015. One shows an aircraft racing along the water at a great speed. The other object was seen rotating and accelerating in mid-air. 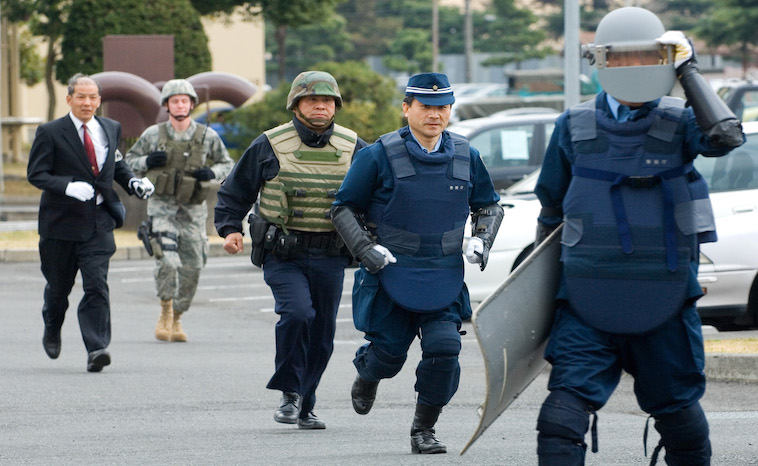 Japan’s UFO contingency plans, drafted by the Japanese Security Defense Forces, are under seal. We can only assume that it would be a military-type response. “We would like to establish procedures in the event an encounter is made with a UFO,” Kono said.

This is assuming that the objects are from outer space or another dimension. Due to numerous movies, it may seem easy to assume visitors from another galaxy. However, other governments on the planet may have created these objects. Most countries assume that only the United States is capable of such technology. That may be the case, but countries like Russia and China may also have developed this technology. Right now, no one knows for sure.

In February 2018, the Japanese government issued its official position on UFOs saying, “no confirmation has been made of their existence.”

While Kono said the Security Defense Forces had not yet encountered a UFO, he added, “If the video can be taken (of a UFO encounter) and if a report is possible, then a report will be made. Discussions will be held with the Air SDF about just what can be done,” he said Japanese ministry officials would ask their Pentagon counterparts about the release of the videos as well as any analysis they had conducted.

The minister said he would consider protocols for SDF pilots in case of encounters, including how to respond to, record, and report any incidents.

Although the SDF has not encountered anything, on November 17, 1986, the Japanese crew of a JAL Boeing 747 cargo freighter witnessed three unidentified objects after sunset while flying over eastern Alaska. All three crew members observed the first two objects.

1. Captain Kenju Terauchi, an ex-fighter pilot with more than 10,000 hours of flight experience,

According to their report, each object had two rectangular arrays of what appeared to be glowing nozzles or thrusters. Further, their aircraft body remained obscured by darkness. When they approached the JAL Boeing, the aircraft’s cabin was lit up, and the captain could feel the heat on his face. These two crafts departed before a third, and much larger disk-shaped object started trailing them.

Will other governments follow suit and set up protocols designed for UFO encounters? We shall see.