In the 1950s Hollywood produced hundreds of sci-fi movies as a response to the growing interest in science fiction. Read below for our list of top 10 space related sci-fi movies.

What influenced Hollywood to produce hundreds of sci-fi movies in the 1950s? More than one thing set the sci-fi movie genre into motion. Incredibly, the Second World War and Literature pushed the genre of science fiction and made it one of the best-beloved genres to this day.

Two events at the end of World War II had major impacts on the science fiction genre. The development of the atomic bomb increased interest in science. Furthermore, it increased anxiety about the possible apocalyptic effects of a nuclear war. The period also saw the beginning of the Cold War and widespread Communist paranoia in the United States.

Many sci-fi movies featured political commentary being mixed with the concept of UFOs. The Roswell, New Mexico incident of 1947 was still fresh in the minds of Americans. The government response to the Roswell incident did not give people a feeling of safety. Instead, it launched conspiracy theories for generations around the idea that aliens and UFOS may exist.

As a result, the movie industry saw a major increase in the number of sci-fi films created throughout the 1950s. The influence of these sci-fi movies helped shaped the mind of Star Trek creator Gene Roddenberry and Star Wars creator George Lucas. 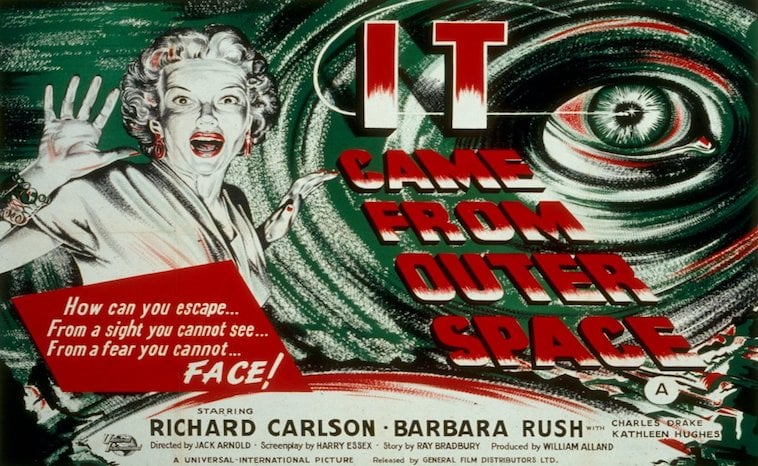 According to science fiction author Robert Silverberg, “the “Golden Age” of the 194os was a kind of “false dawn.” Until the decades of the fifties, there was essentially no market for science fiction books at all. The audience supported only a few special interests in small presses.”

As the genre expanded and gained more readers, big publishing houses like Simon & Shuster and Doubleday brought it to the masses.

What was the common theme of many of these stories? Science fiction stories followed linear narratives. In most stories, the hero solved problems brought by aliens or building-sized ants. In other stories, the military had to use every weapon available to combat an invasion of UFOs.

One of the earlier and most important films of the era was 1950’s widely publicized Destination Moon. It follows a nuclear-powered rocketship carrying four men to the moon, against a background of competition against the Soviets.

Don’t get in the way of this giant ball of jelly-like material. It will consume you.

What happened to a group of scientists sent to a distant planet Altair IV? This movie features famed actor Leslie Nielsen.

4. INVASION OF THE BODY SNATCHERS

Why is everyone acting so very strange?

Imagine a flying saucer landing in your backyard. What would you do?

Can another planet be a path to collide with Earth? How can a team of scientists prevent this from happening?

7. IT CAME FROM OUTER SPACE

Who is this mysterious Exeter really?

9. THE THING FROM ANOTHER WORLD

A UFO lands at the North Pole. What could go wrong?

This story got Orson Welles into a bit of trouble during a radio broadcast. This classic by H.G. Wells will have you on the edge of your seat.

What about you? Do you have a favorite 1950s sci-fi movie? Comment below what you think is a great sci-fi movie from the 1950s.