Imagine having a giant water bubble surround you to protect against a fire. The bubble would never burst no matter how hot the fire burned. Researchers have discovered that dust entering our atmosphere is protected by a bubble. Read on to learn more about water bubbles in space.

Imagine having a water bubble surrounding you to protect against fire. No matter how hot the fire burned, the bubble would prevent any damage from occurring. Strangely enough, scientists have discovered water bubbles covering cosmic dust. Bubbles acting like parachutes cover the dust and protect it.

Cosmic dust particles originate from events such as the arrival of comets in the inner solar system. In addition, many happen with collisions between asteroids, which pulverizes them into dust. Some make it through the rapid descent through Earth’s atmosphere. Moreover, researchers found that cosmic dust particles containing water-rich minerals survive atmospheric entry more easily than water-free cosmic dust. Their calculations suggest the survival of water-rich cosmic dust is approximately double that of dry dust.

How Do they Survive Entry?

The reason why some of the water-rich particles survive the descent is that they contain clay minerals or mud, which have water trapped in them. During the descent through the Earth’s atmosphere, the dust turns into little droplets of molten rock, known as magma, and water inside it boils. This turns the dust into a magma foam bubble, which expands and becomes lighter and cooler, acting like a parachute.

Cosmic dust particles hit the atmosphere at nearly 40,000 km per hour or 11 km per second. Collisions with molecules in the air create intense heat. Consequently, they become destroyed by the heating process, and many of the particles turn into gas and enter the atmosphere.

The ones that survive the descent melt to form tiny little droplets of magma the width of human hair. 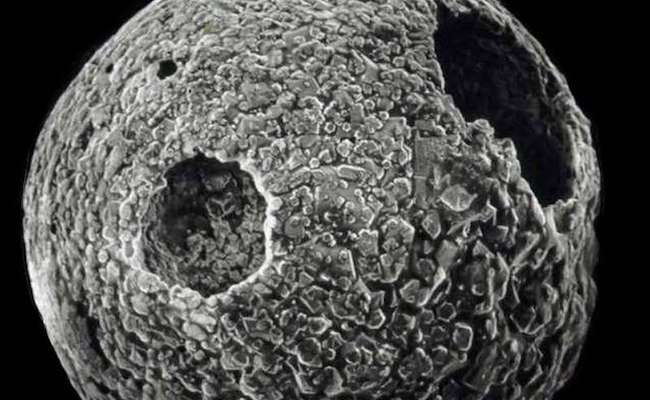 As twice as many water-rich cosmic dust particles survive their descent to Earth, compared to water-free particles. Therefore it is likely that scientists have been analyzing many more samples from ancient events involving water-rich asteroids, compared to events involving water-free asteroids. This may be skewing our understanding of the solar system. Cosmic dust provides us with direct evidence of events that may have happened in our solar system billions of years ago. However, studies show that water-rich particles may be more likely to survive entry compared to dry ones. “Scientists now need to take this into consideration when they are re-constructing ancient cosmic events or trying to develop a more accurate picture of the geological make-up of our solar system,” says Dr. Matthew Genge from Imperial College of London.

How much space dust enters our atmosphere and falls to the Earth? Researchers figured out that the actual amount of dust falling to the earth is along the lines of 60 tons per day.  The dust that falls to earth can be surprisingly helpful to the environment, not only helping to build up clouds in the atmosphere but also helping to fertilize plankton in Antarctica.

With continued research scientists may apply this information to other areas concerning how space dust impacts our Earth. Each day they learn something new and exciting. We may learn something here that can be applied in our technology to further help humans.