The Eternal Paradox: The Discovery of a Black Hole Property That Could Change Physics Forever

British scientists have discovered that black holes have an interesting property, which could be in line with the predictions of the famous physicist Stephen Hawking. It could also help unite the theory of relativity and quantum mechanics and solve the well-known paradox of missing information in black holes.

While deriving the quantum gravity correction equations for black hole entropy, two scientists discovered that black holes create a form of pressure against the space that is around them.

This pressure is small and negative, which could be due to the so-called Hawking radiation. Namely, Hawking predicted that black holes emit heat radiation, which is why they should have a certain temperature, and they should also diminish over time. 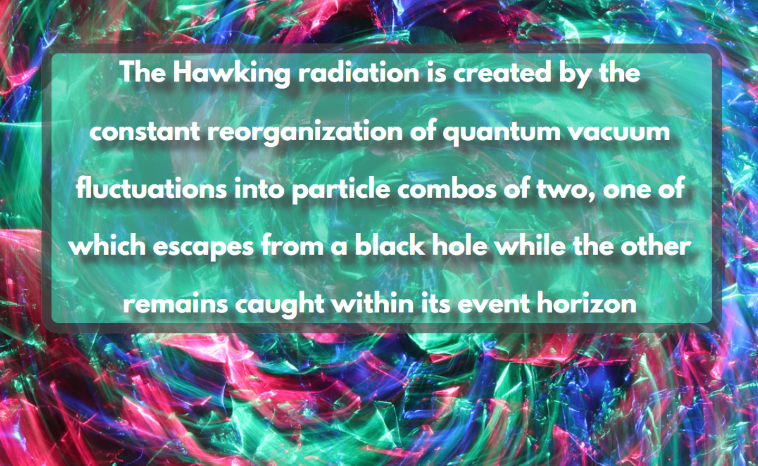 The so-called Hawking radiation is created by the constant reorganization of quantum vacuum fluctuations into particle combos of two, one of which escapes from a black hole while the other remains caught within its event horizon. This horizon is the boundary that limits the space around the black hole from which nothing, not even light, once it enters, can escape.

It is known that for every massive body, such as the Earth or the Moon, there is a certain speed that the spacecraft must reach in order to get rid of the influence of its gravity. In the case of a black hole, that speed should be greater than the speed of light.

Physicists, astronomers, and colleagues Calmet and Folkert Kuipers, stumbled upon his discovery while doing calculations using quantum field theory to try to examine the horizon of a black hole event.

As they performed these calculations, Calmet and Kuipers constantly encountered the extra magnitude that appeared in their equations. Initially, they didn’t realize that this was caused by pressure.

The team is not yet sure what is causing the detected pressure. According to calculations, it is negative and small. This finding might indicate that the black hole shrinks. But for now, it is unclear whether this is due to Hawking radiation.

Nevertheless, the finding could have interesting implications for physicists’ efforts to link general relativity, which works well on the macro scales of planets, stars, and galaxies, to quantum mechanics, which works well on extremely small scales of molecules, atoms, and subatomic particles. This endeavor has been considered the holy grail of physics for decades.

Black holes are considered to be key to this achievement. Namely, in the center of the black hole there should be a singularity that can be described as a high-density, one-dimensional point.

Understanding how two regimes – relativity and quantum mechanics – can be combined could also help solve the big enigma of black holes.

Thinking in terms of relativity, it is believed that information that goes into a black hole could possibly be gone for good. On the other hand, quantum mechanics does not support the idea as it doesn’t allow for the possibility of permanent disappearance of information.

Mathematical research of space-time around a black hole could help solve this paradox.