The American-Russian cooperation in space

In today’s blog, we will put an emphasis on humanity, ignoring all the limits we set between us here on Earth.

So, let’s put aside for a moment the technical drama taking place in space these days after the Russian Soyuz MS-22 spacecraft was discovered leaking coolant around the ship and the station.

In fact, here are the words the director of ROSCOSMOS (Yuri Borisov) addressed to the astronauts on the International Space Station.

“Greetings to the entire American team on the ISS. They proved to be valuable partners in this situation and offered a hand of support and help. Together, you showed the whole world how to work together in the most challenging and difficult situations. Let many politicians learn from you and your example,” said Borisov.

American and Russian astronauts, flight controllers in the USA and Russia are working together to reconstruct the event, that is, to understand the situation and the implications that this failure on the spaceship could have during the most demanding part of the journey when people return from space.

ROSCOSMOS is now working on simulations of the behavior of Soyuz MS-22 during reentry. It will take some time to make a final decision on whether the Soyuz will return with a crew or in automatic mode, without people.

In the latter, Russia will send a spare Soyuz MS-23 to the ISS during February.

Never before has a spacecraft been sent into space on a mission to rescue cosmonauts-astronauts.

Space is our future; there we are all the same and directed at each other. The drama in space continues, just like it does here on Earth.

Heaven on Earth for cosmonauts and astronomy gurus alike

For those not able to go to space (yet), there is a place for you right here on Earth where you can escape all the drama!

Mauna Kea is a dormant volcano on the largest of the Hawaiian Islands. It is of gigantic proportions.

It rises 4,205 meters above the surface of the Pacific Ocean, but most of it is under water. From the bottom of the ocean, this mountain is almost 10,000 meters high and thus higher than Mount Everest (8848). 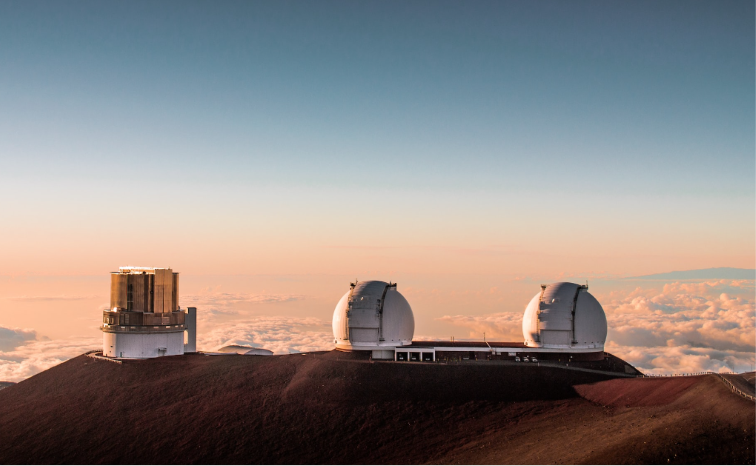 Hawaiians call it White Mountain because its peak is covered with snow in winter. The snow goddess Poliahu lives on that peak.

At least that’s what Hawaiians believe, but what is certain is that the largest and most powerful astronomical observatories in the world are located on top of Mauna Kea!

The top of the mountain is above 40% of the Earth’s atmosphere and 90% above water vapor. The sky over Mauna Kea is therefore extremely dry, which is especially important for infrared and submillimeter astronomy.

The atmosphere is stable, and the city lights are far away, so the sky over Mauna Kea is dark and crystal clear. There are over three hundred clear nights every year!

Because of all this, astronomers say that Mauna Kea is the place where the Earth joins the rest of the universe.