For some of us it may have been a long time since we studied the Solar System in grade school. So here’s your chance to brush up on your cosmic IQ. Take our quiz to see where you rank among the “stars.”

Q. Approximately how old is the Solar System?

Q. What are the 4 outer planets of our Solar System?

a. Mercury, Jupiter, Venus and Mars

b. Jupiter, Saturn, Uranus and Neptune

Correct Answer: The four outer planets (or those that are the furthest away from Earth) include, Jupiter, Saturn, Uranus and Neptune.

Q. Which planet is the largest in our Solar System?

Correct Answer. With a radius of 43,440 miles (69,911 km) Jupiter is twice as massive as all the other planets combined.

Q. Which planets are considered the “gas giants?”

a. Jupiter, Saturn, Uranus and Neptune

b. Venus, Mars, Pluto and Saturn

Correct Answer: The four gas giants are Jupiter, Saturn, Uranus and Neptune. These planets consist mostly of hydrogen and helium with a small rocky core.

Q. Which planet(s) have rings?

Correct Answer: All of these planets have rings, including Uranus (not listed) However, Saturn is the only one with well-define rings. 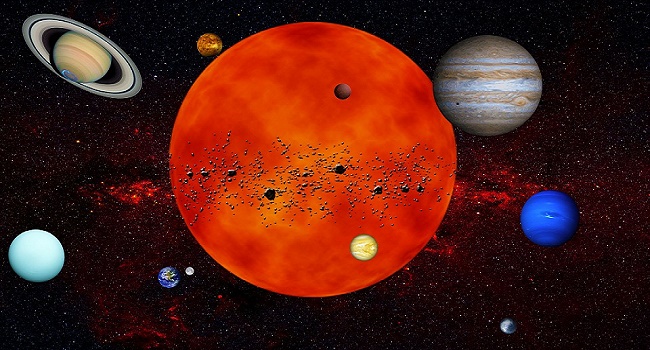 Q. Which planet is closet to the Sun?

Correct Answer: The planet that is closest to the Sun and Earth in proximity is Mercury. For this reason Mercury can be viewed from Earth with the naked eye in the late evening or early morning sky.

Q. Which “chunk of space rock” has a tail on it?

Correct Answer: A comet is a relatively small solar system body that orbits the Sun. When close enough to the Sun it will display a visible coma or tail. This is a fuzzy outline or atmosphere due to solar radiation.

Q. Which planet has the most confirmed moons?

Correct Answer: With 63 so far confirmed moons, Jupiter takes the “moon pie” for the most.

Q. What makes Uranus different from the rest of the planets.

a. It spins on its side

b. it doesn’t have any moons

c. It’s surface is made up mostly of rock

Correct Answer: Unlike the other planets and moons in the Solar System, Uranus spins on its side. One theory suggests a large object may have once crashed into this planet, causing it to change its planetary rotation.

Q. What is the percentage of water found on Earth?

How did you do?

Our Solar system is filled with all sorts of cosmic wonders, so much so that even though it has been explored for many decades now, we are still learning and discovering new things every day. What does space hold for us tomorrow? Stay tuned.