The European Space Agency captured a “plume” cloud on Mars. Read on to find out more about the appearance of this cloud.

At the end of October 2018, the Mars Express orbiter captured a large “plume” cloud coming from the red planet. Near the mountain Arsia Mons, this cloud-like structure has stalled at the peak for several weeks. As rare as this may seem, it has happened before. In 2012, amateur astronomers spotted two large cloud-like plumes high above in Mar’s atmosphere. How high did the clouds appear? The clouds were seen at a high altitude of 200-250 kilometers (124 miles). Without a source of water, how do the clouds appear?

Clouds over Arsia Mons are a common sight throughout most of the year. They tend to clear in the months before the Northern Hemisphere’s winter solstice. Typically the clouds come from dust storms on Mars. After a dust storm, the atmosphere fills with solid particles called condensation nuclei. Consequently, these tiny dust grains provide a stable surface for water ice to condense onto. The planet-wide dust storm that engulfed Mars last June and July provided perfect conditions for a large cloud to form.

Air flow along the side of Arsia Mons can create a cloud full of water ice. For this reason, the cloud is what scientists refer to as an orographic or lee cloud. Orographic clouds form when dense air close to the surface flows uphill and expands. As a consequence, the air cools to a temperature that allows moisture to condense on particles of dust.

Depending on the cloud base height, orographic clouds have different categories. These categories include low, mid, or high-level clouds. As the atmospheric patterns change throughout the day, the cloud changes. Eventually, the cloud vapor can stretch. In this case, the cloud-like plume has spread to 1,500 kilometers (930 miles). As a result, the length of this cloud caught the attention of astronomers. With the re-appearance of the clouds, researchers can gauge the density of particles hanging in the atmosphere. 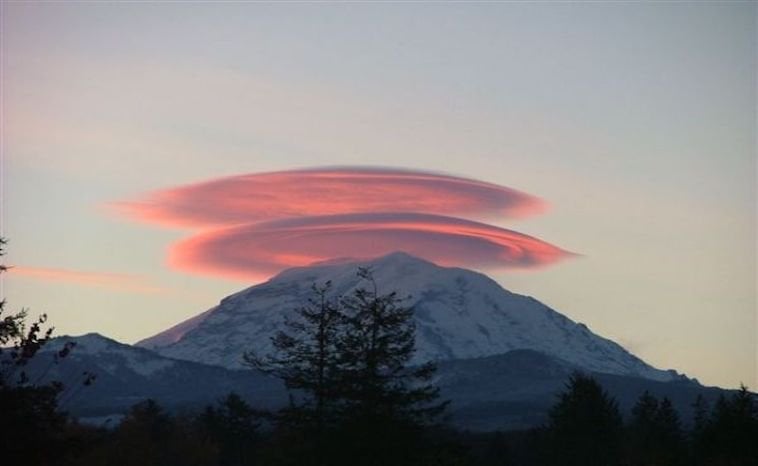 Credit: Tourism On the Edge. Example of Orographic Clouds here on Earth.

Arsia Mons is a shield volcano with a relatively low slope and a massive caldera at its summit. The southernmost of the three Tharsis Montes volcanoes, it is the only major Tharsis volcano south of the equator. The volcano is 435 kilometers (270 mi) in diameter, almost 20 kilometers (12 mi) high. Arsia Mons has an impressive 110km (72 miles) wide caldera.

A caldera is a sizeable cauldron-like hollow that forms following the evacuation of a magma chamber. As large volumes of magma have erupted over a short time, structural support for the crust above the magma chamber are lost.

The word caldera comes from the from Spanish caldera, and Latin caldaria, meaning “cooking pot”. Many people will refer to the Caldera as a crater, but in fact, it is a type of sinkhole. The caldera at its summit is more than 72 miles wide, making it larger than volcanoes on Earth. By comparison, the largest volcano on Earth is Mauna Loa on the island of Hawaii, which is about 6.3 miles high and 75 miles wide in diameter at its base.

As researchers learn more about these clouds, they will have more information for future travel to the red planet.