NASA’s Mars rover Opportunity is waiting out a large dust storm on the red planet.  Will it survive? Read on to learn more about this amazing rover.

Last week, the Mars Opportunity Rover made the news. NASA received data earlier in the month that a dust storm was brewing in the Perseverance Valley where Opportunity roams. The other rover on Mars, Curiosity,  captured pictures of the haze that developed from the winds. The sun-obstructing wall of haze is about six to eight times thicker than average for this time of the season. 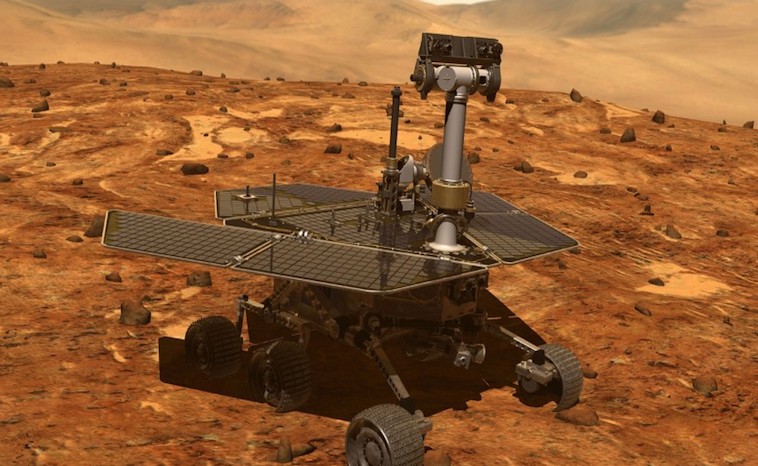 This is not the first dust storm that Opportunity has encountered. In fact, in 2007 a larger storm covered the planet. That dust storm led to two weeks of minimal operations. NASA said that several days went by where they did not have contact with the rover. They intentionally did this to save power. As a result, Opportunity’s engineers calculated for this type of event and knew they would need to make adjustments. With the June 2018  storm, they had no other choice but to shut it down. They knew that Opportunity couldn’t balance low levels of power with its energy-intensive survival heaters. These heaters protect its batteries from Mars’ extreme cold. With a lengthy storm, Opportunity may not have the opportunity to recover from the extreme cold.

The sunlight-blocking haze, called “tau,” is now above 8.0 at Gale Crater — the highest tau the mission has ever recorded. Tau last measured near 11 over Opportunity. As a consequence, that level of tau means that Opportunity may not take accurate measurements.

While Opportunity hunkers down in the storm, rover Curiosity is collecting information. Curiosity will collect large amounts of data for the NASA scientists. They want to know, “why do some Martian dust storms last for months and grow massive, while others stay small and last only a week?

“Martian dust storms are common, especially during southern hemisphere spring and summer, when the planet is closest to the Sun. As the atmosphere warms, winds generated by larger contrasts in surface temperature at different locations mobilize dust particles the size of individual talcum powder grains. Carbon dioxide frozen on the winter polar cap evaporates, thickening the atmosphere and increasing the surface pressure. This enhances the process by helping suspend the dust particles in the air. In some cases, the dust clouds reach up to 40 miles (60 kilometers) or more in elevation.” (NASA, 2018)

Here on Earth, we get dust storms, but no like Mars. In the 1930s, the Midwest portion of the United States suffered terribly from the Dust Bowl. From the events of the dust bowl, farmers learned new ways to manage fields. This new management has prevented subsequent dust bowls. Furthermore, Earth has vegetation cover on land that binds the soil with its roots and helps block the wind and rain that wash the particles out of the atmosphere.

Since landing on Mars in 2004, Opportunity has made a number of discoveries about the Red Planet including dramatic evidence that long ago at least one area of Mars stayed wet for an extended period and that conditions could have been suitable for sustaining microbial life.

We hope that Opportunity survives this great dust storm on Mars. You can follow the Opportunity Mission here.