Have you always wanted to know more about the planet Saturn? Now is your chance! In this blog you can read how Saturn originated, where it can be located, how the planet works and how to best view the planet from Earth!

In this blog we share various facts about Saturn with you. Saturn is very impressive! Did you know it is known as the planet with a ring around it? Saturn is the sixth planet from the Sun. Moreover, Saturn is a gas giant! Curious about our planet Saturn? Read along to get to know more.

Saturn was created 4.6 billion years ago but is constantly changing and condensing, because it is a gas planet. The planet Saturn is also known as a gas giant. As a gas planet, Saturn has no solid ground. Saturn’s surface has been determined by selecting the point at which the pressure equals sea levels here on Earth.

Since Saturn is made of gas, there are no volcanoes or ice caps present on the planet. You can, however, discover ice on the ring of Saturn! Saturn is perhaps best known for the ring that surrounds it. This ring mainly consists of ice particles, debris and dust.

The planet is named after the Roman god of wealth and agriculture. The astronomical symbol of the planet (♄) represents the sickle of this god.

Did you know the Romans named the seventh day of the week (Saturn Day) after the planet Saturn?

Saturn consists of a rocky core surrounded by hydrogen and helium. The structure of Saturn is comparable to that of the planet Jupiter. Saturn’s core is very hot and can be as high as 11,700 degrees! With this internal heat, Saturn heats the space around itself. It radiates 2.5 times more energy into space than it receives from the Sun.

The planet has a light yellow hue due to the ammonia crystals in the upper atmosphere. As you get closer to the core of the planet, the pressure and temperature of the atmosphere increases. 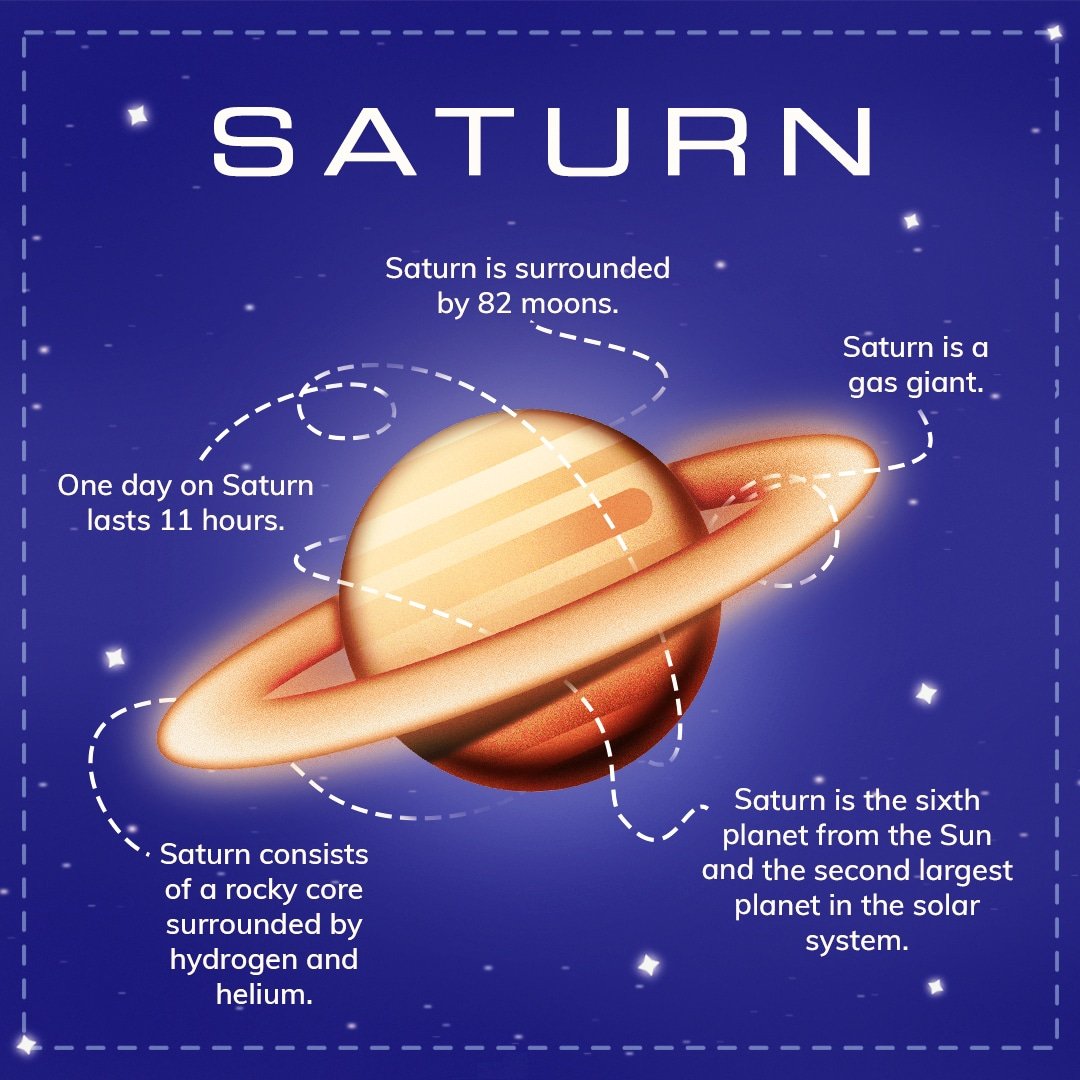 The planet Saturn in our Milky Way

One day on Saturn lasts 11 hours. However, one year on Saturn is equal to 29.5 years! This is because the distance between the planet and our Sun is over 1.4 billion kilometers.

The average temperature on Saturn is minus 178 degrees Celsius. So Saturn is a pretty cool planet! When traveling from the north to the south on Saturn, a difference in temperature may be difficult to notice. This is caused by the core of the planet which itself mainly causes the most heat differences.

Did you know several astrologers believe it rains diamonds on planets like Saturn?

Wind speeds on Saturn can reach up to 1800 kilometers per hour! This is faster than on Jupiter, but not as fast as on Neptune.

Saturn’s location in comparison to other astronomical objects

Saturn is the sixth planet from the Sun and the second largest planet in the solar system. Only Jupiter is bigger than Saturn.

Jupiter and Uranus are Saturn’s neighbors. Saturn is mainly surrounded by moons. There are about 82 moons orbiting the planet. Of these moons, 61 are currently officially named. The largest moon Titan is also the second largest moon in our entire solar system. This moon is even bigger than the planet Mercury!

The planet’s environment makes it difficult for life as we know it to survive. The planet’s temperature, pressure and materials are too extreme for organisms like humans to adapt to.

While there is little possibility of life on Saturn, Saturn’s moons (like Titan) could possibly contain life!

Just like Mercury, Venus, Mars and Jupiter, Saturn is also visible to the naked eye from Earth! However, the other planets are more easily visible than Saturn, since Saturn is the furthest away from these five planets.

You can see Saturn in the night sky. The planet appears as a yellow bright sparkle in the sky. Most people need large binoculars or telescopes to see Saturn properly. Mercury, Jupiter, and Saturn all appear in the east before sunrise.

The planet Saturn is full of surprises!

We’ve introduced you to our planet Saturn, the sixth planet of our solar system measured from the Sun. In this blog we have told you what the gas giant planet Saturn looks like. We have also elaborated on how the days and years work on Saturn. Did you know Saturn is visible from the Earth? We have told you what the planet looks like and that it is a gas giant. In addition, we explained to you how the days and years on Saturn work and that it is possible to see the planet from Earth. Go on a journey through our solar system and view our stars and planets with the OSR Star Finder App. View Saturn at any time!